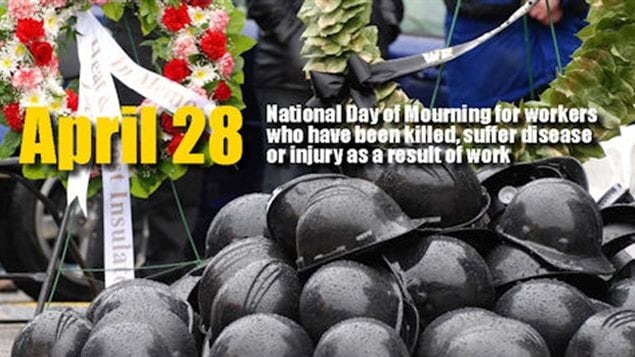 A pile of workers helmets painted black to symbolize workers who have been killed on the job. Unions and workers will attend ceremonies today across the country to remember and to call for improved safety regulations
Photo Credit: via CBC

On average, every day in Canada, 2.47 people are killed in work-related  accidents.

Initiated by the Canadian Labour Congress, in 1984, as a day of remembrance for workers killed or injured on the job, April 28, was officially recognized by the federal government in 1991 as the National Day of Mourning for workers and the Canadian flag will fly at half-staff on Parliament.

The Day of Mourning has since spread to about 80 countries around the world and has been adopted by the AFL-CIO and the International Confederation of Free Trade. 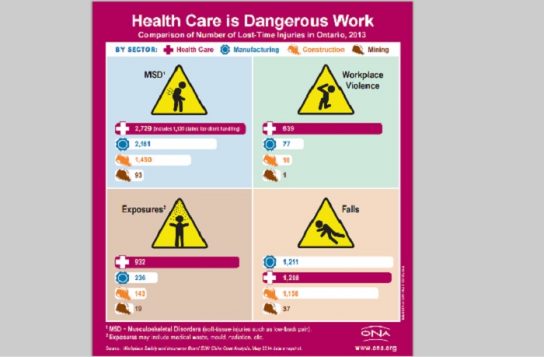 Nurses are especially concerned. They say health care workers have the highest rates of illness and injury in the workforce, including police and firefighters.

The Ontario Nurses’ Association (ONA) also cites three cases highlighting nursing deadly hazards; Tecla Lin and Nelia Laroza -who contracted and died of SARS while caring for patients- and Lori Dupont, who was murdered in Windsor while working in the recovery room of Hotel-Dieu Grace Hospital.

The ONA is the union representing 60,000 registered nurses and allied health professionals, as well as more than 14,000 nursing student affiliates providing care in hospitals, long-term care, the community, public health, clinics and industry

One western Newfoundland woman said she would be thinking about the teenaged brother she lost in 1965. She told CBC news today that the death still haunts her family decades after it happened. The teenager was unloading a truck when a pulley snapped and dropped the heavy load of steel onto him, killing him instantly.

“The family has never been the same again,” she said. “We were together but it’s something you never get over.”   Thursday his name will be added to a monument in Corner Brook, Newfoundland which was built to commemorate workers killed or injured on the job.

Several marches will take place and other workers monuments dedicated in cities across the country to remember those who were killed and injured on the job and to seek regulations and employer policies to improve workplace safety and security.

Several marches will take place in cities across the country to remember and to seek regulations and employer policies to improve workplace safety and security.