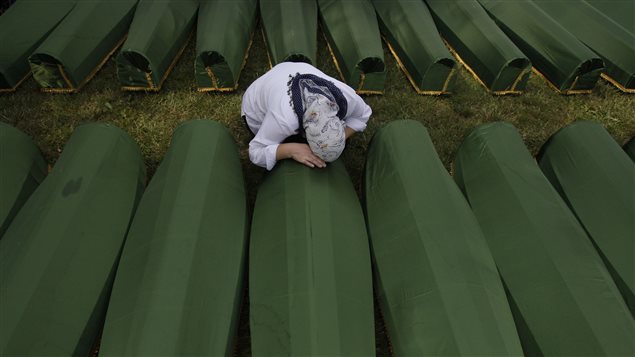 In this Thursday July 11, 2013 file photo, a Bosnian woman cries near the coffin of her relative Srebrenica, Bosnia. More than 8,000 Muslims were killed by Serbs in 1995 in what the United Nations has called a genocide.
Photo Credit: Amel Emric/AP Photo/file

The government of Bosnia is asking Canadian legislators to fix their “mistake” of omitting the 1995 Srebrenica massacre from their recent recognition of 20th century genocides.

Canada’s Parliament unanimously passed a motion last Friday declaring April to be Genocide Remembrance, Condemnation and Prevention Month. The motion cited four atrocities: the Holocaust, the 1915 Armenian massacre by Ottoman Turks, the 1932-33 Holodomor famine in Ukraine and the slaughter of ethnic Tutsis in Rwanda in 1994.

It did not include the Srebrenica massacre during which more than 1,000 Muslim men and boys died. In all an estimated 8,000 more were killed by Serb forces in eastern Bosnia in 1995. The United Nations has recognized the killings as genocide.

The motion in Canada’s Parliament was not a major government piece of legislation, but a private member’s bill.

In 2010, the House of Commons adopted a motion establishing Srebrenica Remembrance Day. At least three parliamentarians urged the new motion be changed to include the Srebrenica massacre.

They noted the Canadian National Museum of Human Rights in western Canada has had a permanent exhibition on the Srebrenica genocide since September.