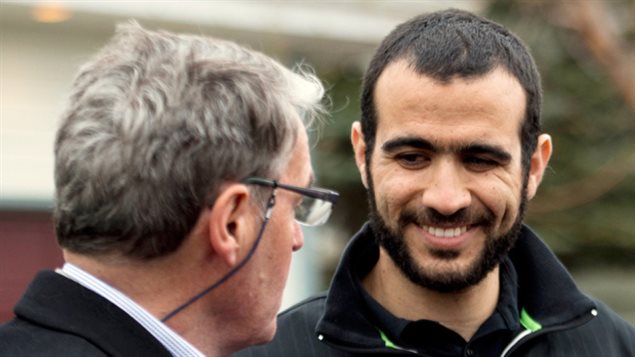 Omar Khadr, right, speaks to his lawyer Dennis Edney outside his new home after being granted bail in Edmonton on May 7.
Photo Credit: CP Photo / Nathan Denette

Nearly three weeks after former child soldier Omar Khadr was released on bail in Alberta, Canadians remain divided about him.

However, an Angus Reed poll released over the weekend also suggests that the visceral antipathy toward the Toronto-born Khadr by many Canadians may be softening.

Sixty-seven per cent agreed that Khadr was a “child soldier” and that he should have been dealt with accordingly.

But when asked whether Khadr had been treated fairly or unfairly, 40 per cent said they were “unsure.”

“It could simply be Canadians need to see more of Omar Khadr to make up their mind,” says Shachi Kurl, the Angus Reid Institute’s senior vice-president. When Khadr, who is now 28, emerged from prison earlier this month, he projected a gentle personality, apologizing for any pain he had caused and saying he wanted to go to university to study to follow career in health care.

Khadr has long been a polarizing figure in Canada.

His supporters say he was left abandoned at the US prison at Guatanamo Bay prison by Prime Minister Stephen Harper’s Conservative government.

Critics also accuse the government of wanting to use Khadr as a prop for a “tough-on-crime” agenda in this fall’s federal election.

The government has appealed Khadr’s bail release, saying he remains an unrepentant war criminal and a dangerous threat to Canadian security.

Human Rights groups, including Amnesty International, have consistently condemned the government’s treatment of Khadr, who is believed to be the only child soldier put on trial in modern history.

As well, Canadian Courts and UN experts have repeatedly called on the government to provide a remedy for the human rights violations in this case, including torture and ill-treatment.

While in Guantanamo, Khadr pleaded guilty to five war-crimes charges, including murder, for killing an American soldier during a firefight in Afghanistan in 2002 when Khadr was 15.

He was in Afghanistan with his mother and father, who was a close advisor to Osama bin Laden.

After spending 10 years in Guantanamo, Khadr was sentenced by a US military commission in 2010 to an additional eight years and sent to Canada.

Khadr later repudiated his guilty plea, saying it was the only way to get out of Guantanamo.