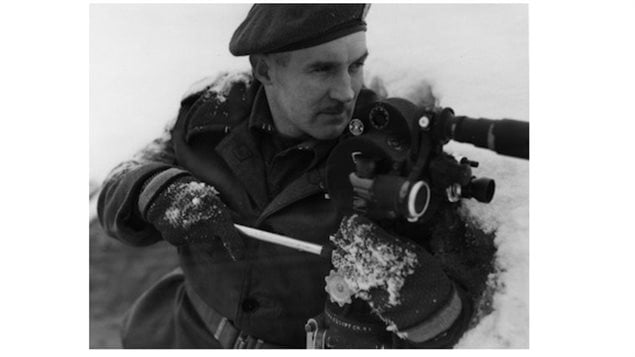 Prior to the war, Hugh McCaughey worked at a camera shop in Vancouver on the Canadian west coast. In 1942 he joined the hundreds of thousands of other young men and enlisted in the Army offering his experience behind a lens to document the world shattering conflict.

He became part of the Canadian Film and Photo Unit (CFPU) and followed the front lines of the war as it advanced across northwestern Europe. He wrote dozens of letters to his family and now they have been donated, along with his war diary, to the Canadian War Museum

The collection included some 215 letters home where now “Sgt.” Hugh McCaughey, aged 37 at the time, gave his family back in Vancouver a look into his experiences as a combat cameraman.

Mark O’Neill, President and CEO of the Canadian War Museum and the Canadian Museum of History says, “It shows how, in the face of unimaginable danger, these men simply did their jobs, recording the war from a Canadian perspective.”

The Canadian Film and Photo Unit (CFPU) was established in 1941 as part of the Army Public Relations Branch. From 1943 on, the unit’s cameramen accompanied troops into battle, filming scenes of action, liberation, visits by dignitaries and soldiers’ everyday lives.

After filming on the continent, the cans of film were flown to Britain, processed, screened by censors and newsreel-makers, and dispatched by air to Canada. In addition to being used in commercial newsreels and short feature films, footage shot by the CFPU was edited into a weekly Canadian Army Newsreel for screening to Canadian troops.

Like almost all letters to parents, Sgt McCaughey wrote often that he was safe and well.

In his June 9th letter from England he wrote ..”this one comes from a tent and is now my new residence. The location is nice and I don’t mind the outdoor life at all except the English weather seems to be more unsettled than at Vancouver…”

In England, he was at the docks filming the first of the returning soldiers where he says he saw some “gruesome sights”.

He says he talked to many of the returning British soldiers and found them.. “broken in body and spirit, minus legs and arms and as usual the majority of them just kids”

He said German prisoners seemed glad to be out of the war, and while the British soldiers seemed dispirited, he said “not the Canadians”. He wrote the Canadian casualties “laugh and smile, and as orderlies would help a Canadian from the boat, he would continue to crack jokes and answer all my questions”. He added the British were full of praise for the Canadians.

In later letters he recounts how he walked down the recently liberated Champs-Elysee in Paris as part of a huge parade. “”As I pass, with my camera on my shoulder, someone yells ‘Canadien’ and everyone takes it up, and shouts and the cry goes all down the line as I walk past.”  He wrote that the crowd surrounded him just to touch him as if he were “some kind of spiritual healer”.

Letters to his brother told other details than those sent to his mother, including how Parisian women could be “naughty”.

Of course he also had some close calls, recounting on one occasion how he set up his 16mm camera in a supposedly liberated town, only to have bullets whiz by seconds later as he ducked for cover.

Jeff Noakes says the diaries and letters are an important addition to understanding the war and also add context to the photos and films of the six year conflict by adding and additional human touch.

The letters had been sitting for years and McCaughey’s son Bruce said the family wasn’t sure about their continued safety. He scanned the letters, many of which the immediate family had never read.

He added he learned a lot about his father who had returned to his camera salesman job and died in 1972.  He says it’s not that his father didn’t talk about the war, rather that he himself was too young for the stories to register at the time.

He hopes now the letters may help younger Canadians gain an appreciation of how the war was different from the Hollywood features, “not the war-hero type stories”, and how the experience differs from conflicts of today.