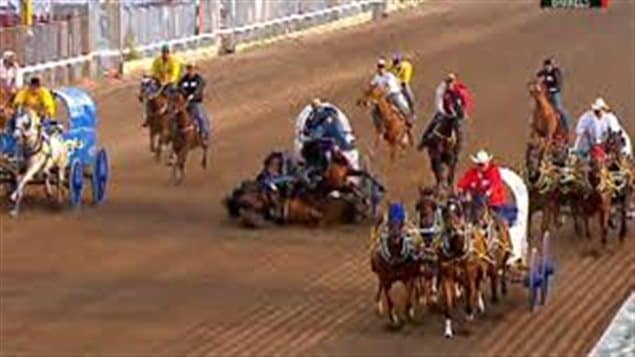 At the heart of the dispute between animal rights activists and the Calgary Stampede are events like this 2012 chuckwagon race crash in which one horse died instantly and two others were put down by veterinarians.
Photo Credit: cbc.ca

The Calgary Stampede, the festival and rodeo that bills itself as “The Greatest Outdoor Show on Earth,” wrapped up last weekend after a 10-day run, leaking at the box office and under fire from animal rights activists.

While attendance was down, animal deaths were up in the controversial and much-debated chuckwagon racing competition.

Four horses died. Two were pulling chuckwagons, two others were outrider horses that did not make contact with any other horses or wagons.

The figure is provided by the Vancouver Humane Society and is based on reports by animal rights activists in Calgary.

The Vancouver Humane Society says thirty other animals–mainly steers, calves and bucking horses, as well as nine horses killed in a stampede in 2005–have been killed or been put down since 1986.

Chuckwagon racing is a team event, led by a driver who commands a team of horses pulling the chuckwagon. The wagon is supported by two or four outriders, each racing individual thoroughbred horses that follow the chuckwagon.

While the races are a hit with the public, they continue to draw criticism from animal rights activists who say the deaths are unwarranted.

Last week after the first two horses died, the national animal rights organization Animal Justice called on the Calgary Humane Society to prosecute what it called “inhumane rodeo practices” at the Stampede.

This past Monday following the two weekend deaths, Communications Director Kurt Kadatz announced that the Stampede would carry out a review of animal safety.

Animal Justice’s director of farmed animal advocacy, Anna Pippus, then issued this statement: ” The Calgary Stampede’s plan to undertake yet another review of its animal welfare policies is a classic case of the fox guarding the hen house,”

On Thursday, RCI spoke by phone to Mr. Kadatz at his Calgary Stampede office.