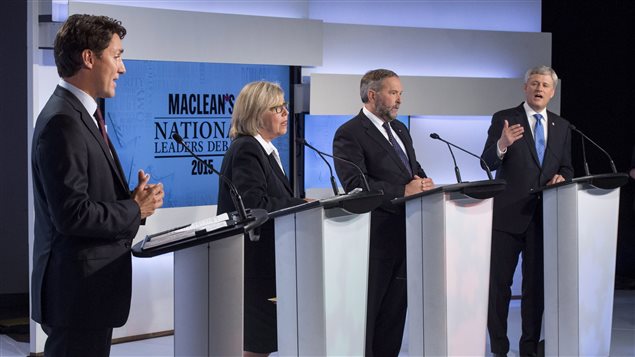 The leader’s debate that aired on Canadian television Thursday night was the subject of much debate Friday. While many Canadians did not tune in, as it was a lovely summer evening in several regions of the country, those that did tune in were not disappointed.

The three leaders of the major federal parties, the incumbent Conservative, the Liberal party and the New Democratic Party, as well as Elizabeth May, the leader of the Green Party, while small in terms of representation, is a federal party, took turns taking each other on in discussions around the economy, the environment, governance and security.

Professor Nelson Wiseman of the Political Science Department at the University of Toronto, says while it was an interesting evening, his hunch is that not many people changed their mind about their vote.

According to social media tallies, many felt it was Elizabeth May that won the night!  Twitter Canada said May received the most new followers following the debate at 3,300, followed by Justin Trudeau, who already had a solid presence on Twitter, He posted the most re-tweets, so someone was managing that account.

On Friday, however, an unfortunate spelling error declared Prime “Minster” Stephen Harper the winner! As you may imagine, great fun was had with that! 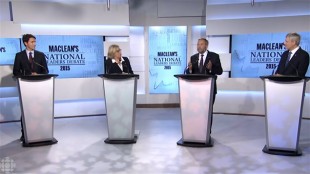 But Professor Nelson Wiseman is reserving judgement.  He says, “a more definitive outcome will now be determined by these polls which will indicate where the parties stand, and I expect we’ll have two or three of them this week”.

He says strategic voting will be a major reality in this election, in the attempt not to split the vote. He says the traditional liberal voters have divided loyalties; those more conservative and those even more liberal.

Professor Wiseman says another factor in the final weeks of the campaign will be the ads that the very well-financed Conservatives will be able to run, while the more cash-strapped parties will be spent by then. He cautions: “Remember we’re still 73 days from election day.”

Most pundits seem to agree that this debate, while it may play a role in framing the issues, will be a distant memory when the majority of voters begin to really tune in, sometime in September.