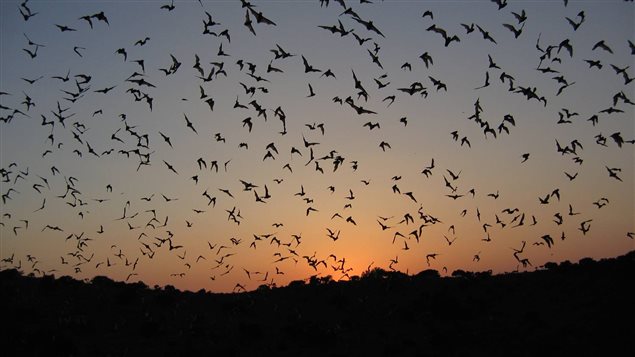 Bats are under threat in North America but new research suggests a way to help them survive. Bats are important because they eat huge quantities of mosquitos and other insects, sometime acting as a natural pesticide on farmland.

Bat populations are in serious decline partly because agriculture is eating up some of their habitat and because an infectious disease called white-nose syndrome which is decimating them.

Farmland can be a rich source of food for bats, but not all the time. Insects decrease when the crops are harvested or are otherwise in decline. Researchers from Concordia University in Montreal and the University of Tennessee in the U.S. looked into the importance of different types of habitats for insect-eating bats in south-central Texas.

“The supply (of insects) varies greatly throughout the growing season,” says Noa Davidai, a biologist and co-author of the study. “And it’s during periods of decreased crop quality that these areas of farmland no longer provide a sufficient insect source for the bats. And the natural habitats become really crucial for maintaining the bat populations.”

The time when crop lands provide the least sustenance is also the time the bats need it the most. It’s a time when females are lactating and young bats are starting to forage.

Patches of natural habitat can help

Researchers conclude that preserving patches of natural habitat around farmland could help slow the plummeting numbers of bats in Canada and other parts of North America.

“Areas of natural habitat in and around the agricultural region basically provide consistency in the bats’ food supply over time and are really crucial for maintaining and sustaining the bat populations,” says Davidai.