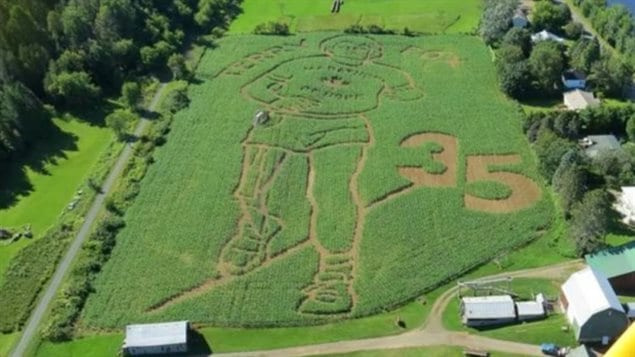 The Terry Fox Marathon of Hope corn maze is the big draw in Florenceville-Bristol, New Brunswick these days.  The Hunter family has created mazes in their corn field for 17 years now, but this one is garnering the biggest response.

Perhaps it’s because this is the 35th anniversary of Terry Fox’s epic attempt to run across Canada.  The 2.5 hectare corn maze was inspired by a personal connection.

“He ran by our house and we met him”

Terry Fox was born in Winnipeg, Manitoba and moved to British Columbia with his family when he was 10. At 19 he lost his right leg to cancer.

In April 1980, Terry Fox began  his “Marathon of Hope”, to raise money for cancer research and awareness.  He left St. John’s, Newfoundland, determined to run across Canada on his artificial leg  His hopping movement along the route is an image famiiar to so many Canadians  .

Alone in the beginning, Fox gained support and media attention as he moved across four provinces  It was in Thunder Bay, Ontario, in September, that chest pain forced him to stop and call off the remainder of the run.

Terry Fox died in 1981, but millions of dollars have been raised since in ‘Terry Fox Runs’ across Canada and abroad.

“We decided to pay tribute to the 35th anniversary of the Marathon of Hope, and because he ran by our house and we met him,” Chip Hunter told CBC News.

The farm partnered with the Terry Fox Foundation. The annual maze will open to the public in mid-September, later than usual, due to slow growing conditions this summer. Farmer Shelley Hunter says it has been worth it.

“The first thing it takes is inspiration and the second thing is perspiration. So the inspiration part, we like to keep a Canadian theme if we can and we also like to make it educational,” he said.