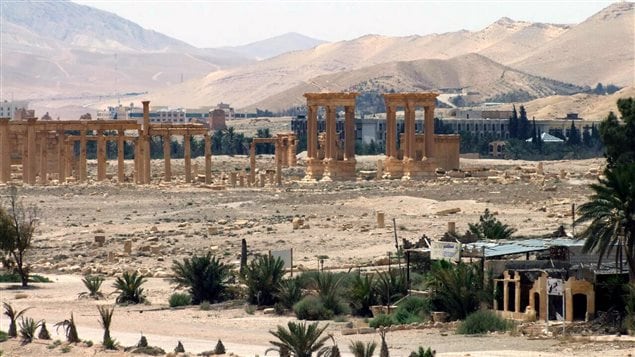 Palmyra, the site of the majestic ruins of an old Roman city, is now the scene of barbaric destruction.  Last week Islamic State extremists beheaded the revered Palmyra scholar, Khaled al-Asaad, hanging his bloodied body from a pole in the town’s main square. This atrocity was soon followed by news the militants blew up the Baalshamin Temple.

An oasis in the Syrian desert, north-east of Damascus, Palmyra was one of the most important cultural centres of the ancient world. In the 1st and 2nd centuries, Palmyra was the crossroads of several civilizations, combining Graeco-Roman architectural techniques with local tradition and Persian influences. Today it signals the end of civilization with the wanton destruction of human heritage.

“It’s wiping out all identities all traditions, anything that would basically make humanity, human “

Professor Clemens Reichel, Associate Curator for the Ancient Near East at the Royal Ontario Museum in Toronto, says he and many of his colleagues are still in shock. He describes the Temple of Baalshemin as testimony to the cosmopolitan nature of this city, that millions visited until the IS takeover.

“To me it was always one of the most beautiful buildings in Palmyra” Reichel says. ‘It had very unique near eastern idiosyncracies” Reichel says he and his colleagues are running the gamut of emotion in the wake of the tragedies. The one thing he can advise is not to fund the terrorism. “Don’t buy antiquities from Syria, if you find anything on the market anywhere, you better talk to one of us.”

Reichel says his first encounter with cultural devastation came during the first Iraq war in 1990, but he says in retrospect it pales in comparison to what is happening in Palmyra. He says this is not looting for money, it is annihilation.

“The major targets, or the absolute largest number of monuments and shrines that have been destroyed by ISIS has not been Christian or antique shrines, it’s been Islamic shrines.  So it’s a warfare not  just against other religions and ethnicities, it’s a warfare against their own people: it’s wiping out all identities, all traditons, anything that would basically make humanity, human.”