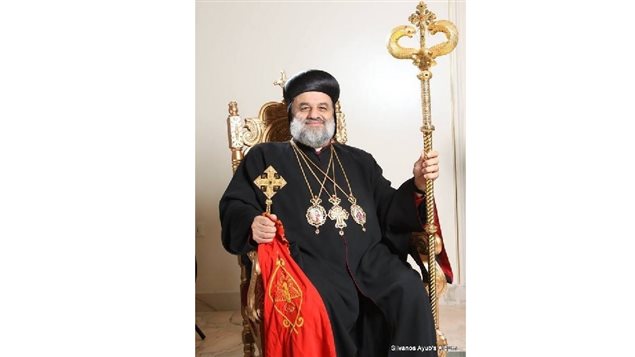 His Holiness, Mor Ignatius Aphrem II, Patriarch of Antioch and All the East and Supreme Head of the Universal Syriac Orthodox Church will visit Toronto and then Montreal starting this weekend
Photo Credit: supplied

The 123rd successor of St Peter in the Apostolic See of Antioch is set to visit Canada for his first visit starting this weekend.

His Holiness, Mor Ignatius Aphrem II, Patriarch of Antioch and All the East and Supreme Head of the Universal Syriac Orthodox Church will visit Toronto and then Montreal.

Fate of Christians in middle east

The theme of his visit however is of great seriousness.  He will be speaking about the deteriorating conditions for Christians in Syria, Iraq and other parts of the Middle East and the gloomy prospects of their experiences and their future in the face of persecution, violence, discrimination and deportations.

The New York Times reported this week that contact with dozens of Christians has been lost after Islamic State (ISIS) militants attacked the isolated oasis town of Qariyatain in Homs Province, Syria earlier this month.

Also in February, the BBC reported that Christian clerics were being kidnapped and thousands of other Christians forced to flee throughout the region..

Earlier this year, the Vatican urged the international community to take action to prevent attacks on Christians in the Middle East.

Archbishop Bernardito Auza, the Permanent Observer of the Holy See to the UN, said   “Faced with the unbearable situation of living in a conflict zone controlled  by terrorist and extremist organizations who constantly threaten them with death, and  with a  deep sense of feeling abandoned to their fate, by the legitimate authorities and the International  Community,  entire communities of Christians, especially from Northern Iraq,  have been brutally  forced to flee their homes and they have sought refuge in the Kurdistan region of Iraq and in the neighbouring countries of the region,”

In March, Newsweek magazine ran a feature on attacks on one of the oldest Christian communities in Syria.  The article says that whereas Christians once comprised about 20% of the population in the Middle East at the start of the century, that number has shrunk to only about five percent now.

“Some of the oldest Christian communities in the world are disappearing in the very lands where their faith was born and first took root,” says the Center for American Progress in a report published also in March of this year.

Another theme involves the expectations of the Syriac Orthodox Community from the government authorities, on national and international levels.

His Holiness, Mor Ignatius Aphrem II will be in Toronto/Markham on Sunday August 30 and then in Montreal September 4.