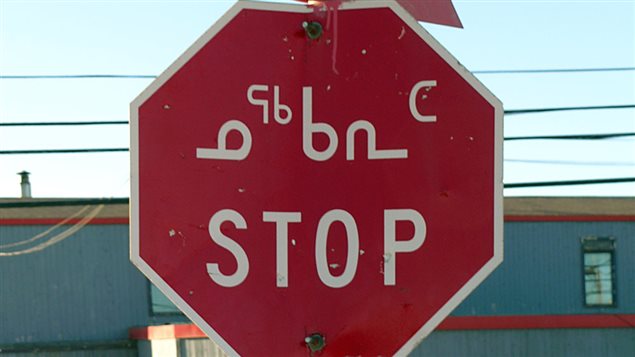 For eons, the Inuit in the circumpolar world had no written language. In the 1700’s missionaries introduced writing to Greenland Inuit, and later efforts spread to the Canadian Arctic and Alaska.

However, as the areas were exposed to differing missionaries at different times, a mix of writing developed, with some missionaries using the Roman characters and others using slightly varied versions of syllabics, adapted from Cree and Ojibway syllabics  which in turn had been devised by missionaries using Pitman shorthand trying to interpret sounds in the language.

“Existing writing systems have been imposed on us.,”.

However some dialects and some regions still do not use the ICI system,

Recently there have been renewed calls for a unified system across the Canadian north, and that syllabics be changed for a new Inuit language system based on Roman orthography.

At a meeting  this week in Iqaluit, Nunavut, representatives from the Inuktitut speaking areas joined the Atausiq Inuktut Titirausiq (AIT) to discuss the issue and decided to switch to more standard Roman orthography across the Arctic.

They will recommend the switch in a draft document presented to the National Committee on Inuit Education Sept 9.

“Existing writing systems have been imposed on us. Canadian Inuit now have an opportunity to choose and create our own unified writing system,” the draft said.

“The recommendation from this summit is for jurisdictions to formally explore the implementation of an Inuit writing system rooted in a standardized form of Roman orthography that is developed by Inuit, for Inuit, and introduced through the education system.”

While some expressed concern that the new system would have a negative effect on unique regional dialects, but delegates said syllabics could continue to be taught in higher grades in those regions where syllabics have traditionally been used.

The unified written language proposal would see a new writing style of Roman lettering beginning in kindergarten and then moving up through the education system.

The group noted that a new system would simplify communication and promote Inuit culture in the digital medium.

with files from Nunatsiaq news