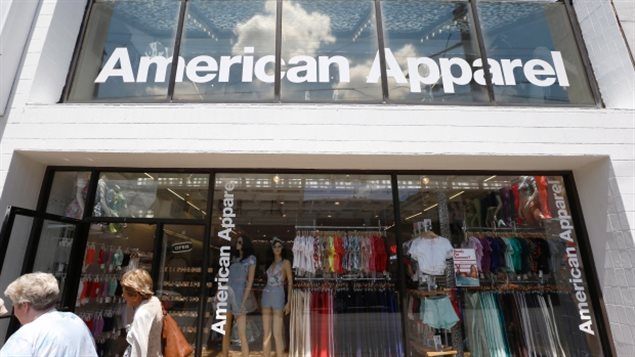 American Apparel, the creation of controversial Canadian, Dov Charney, is in bankruptcy protection in the United States. Most stores remain open and the future hangs on the upcoming Christmas shopping season.
Photo Credit: CBC

American Apparel surprised very few people when it filed for Chapter 11 bankruptcy protection on Monday. The U.S. clothing retailer that was founded by controversial Canadian, Dov Charney, is hoping to restructure and save the sinking enterprise.

With 227 stores in 19 countries there is a lot at stake. But the Los Angeles-based company, which has not seen a profit since 2009, will keep the stores operating, particularly as we’re heading into the crucial Christmas season.

The company, one of the only clothing manufacturers left in North America, boasted about its quality garments and fair labour practices and weathered the criticism over it’s sexist ads.

However, Charney, who was fired as chief executive in December for alleged misconduct, including misusing company funds and failing to stop a subordinate from creating blog posts that defamed former employees, has cast a shadow over the brand. There was a steady stream of highly publicized lawsuits accusing him of sexual harassment.

Charney has filed several lawsuits against the company, alleging defamation, representation in false light and securities fraud. These will be delayed by the bankruptcy process.

The company’s shares closed at 11.2 cents on Friday.  One month ago it announced it might not have enough capital to sustain operations for 12 months. As of Friday, the company had a market value of $20.5 million. This Christmas shopping season will be crucial.