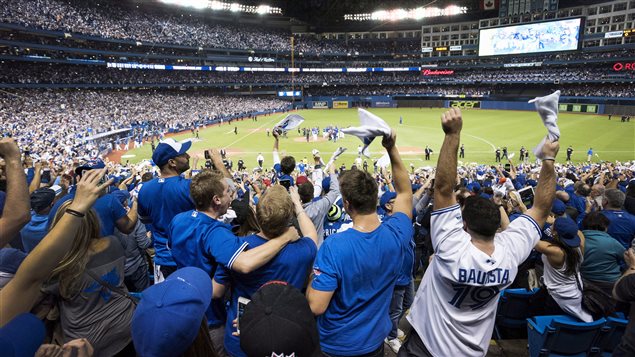 Toronto fans were ecstatic after the Wednesday's victory. In the seventh inning, not so much.
Photo Credit: CP Photo / Darren Calabrese

The Toronto Blue Jays moved ahead Wednesday evening in their bid to win their first World Series since they won back-to-back titles in 1992-93.

In a game marked a bizarre event and a defensive collapse by their opponents, the Blue Jays defeated the Texas Rangers 6-3 in their quarter-final playoff round, officially known as the American League Division Series.

In the course of the evening, a very un-Canadian thing occurred. The fans at Rogers Centre baseball became (dare we even use this term?) unruly. Very unruly.

This is not a particularly small matter. Under normal circumstances (which, of course, excludes anything hockey related) we are a polite tribe, famous for begging our own pardon when somebody bumps into us.

That’s how it went for most of the game. The nearly 50,000 fans appeared quite content to cheer wildly, bite their finger nails and wave white towels.

But things turned sour in the top half of the seventh inning, a seventh inning that wound up taking a mind-boggling 53 minutes to complete.

The bad turn began when Jays catcher Russell Martin accidentally hit the bat of an opposing hitter with an errant throw, allowing Texas to take a 3-2 lead.

After much wrangling between umpires and managers, the play stood and people in the stands became incensed.

A lot of normally placid Canadians lost their collective cool, throwing bottles, cans and anything else they could get their hands on down toward the playing field.

It wasn’t pretty and a baby was hit by the spray of a thrown beer can.

Police say the baby, who was uninjured, was with her mother in the front row of the stands when the can was tossed in their direction.

Television cameras captured a teary woman holding her baby shortly after the incident.

Police say charges will be laid.

As things began to calm down, the Rangers defence went to pieces in the bottom of the inning, committing errors on three consecutive routine plays.

Four runs later–three of them coming on a home run by Jays long-time stalwart Jose Bautista–the Jays had enough runs to win.

They begin a best-of-seven series Friday night in Kansas City against the Royals.