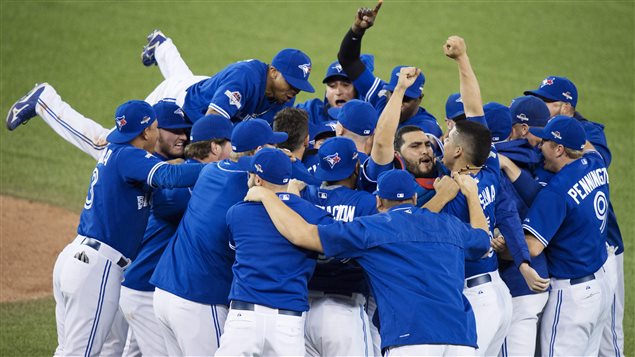 In what may have been–indeed, was–the most bizarre and most intense baseball game this former sportswriter has ever witnessed, the Toronto Blue Jays defeated the Texas Rangers at 6-3 Wednesday evening before close to 50,000 people at Rogers Centre and millions across Canada to win the fifth and deciding game what is officially called the American League Division Series.

It’s a highfalutin title full of sound and fury signifying nothing more than winning a quarter-final match at Wimbledon. Lovely to celebrate but leaving two more series to win to gain Major League Baseball’s championship, the World Series.

That quest started Friday night and Saturday afternoon against the Royals in Kansas City. The winner of the best-of-seven series advances to the World Series against the National League champion.

The Jays partied hard after Wednesday’s victory–something that might give pause about the team’s chances over the next couple of weeks.

Two weeks ago, after clinching the American League East, the Jays staged a star-studded celebration in Baltimore. Their collective mojo gave way to a collective hangover as they lost three of their last four games and blew a chance for homefield advantage against Kansas City.

Still, when the playoffs began, the team did not appear especially concerned about the desultory final regular season run as they prepared to meet Texas.

The Jays lost the first two games at home, playing some pretty mediocre baseball in the process.

Only two teams have ever lost the first two games of a best-of-five series at home and come back to win.

All of a sudden, things looked just a tad bleak for the Jays and their fans.

But low and behold, the slugging Jays found their game in Texas, forcing Wednesday’s winner-take-all decider.

Falling behind early, they rallied to tie, then gave up the lead on a bizarre one-in-a million accident in the seventh inning when catcher Russell Martin’s return throw to the pitcher clipped the bat of the unsuspecting waiting batter. The ball then skipped into no-man’s land down their third-base line as the Rangers runner on third bolted across the plate.

The play was followed by much who-ha as managers and umpires figured out what to do. After considerable debate, the runner was ruled safe.

The decision did not sit well with the people in the stands, many of whom began acting in very un-Canadian fashion (unless, of course, they were attending a hockey game) by throwing bottles and whatever else they could muster on the field.

Things finally calmed down, and in the bottom of the seventh, the Rangers collapsed. Their infielders made errors on three consecutive routine groundballs.

By the time the 53-minute seventh was over, the Jays had four runs, three coming on a home run by the team’s longest-serving player, Jose Bautista–a fitting conclusion as Bautista has served long and hard and with class and dignity through some very lean Toronto seasons.

I confess that as I prepared to watch the game, I was unsure if the Blue Jays were as good as they seemed to believe they are.

Are they all bravado? I wondered.

Evidently, they are not.

Boys, of course, will be boys so one can only hope Toronto’s Boys of Summer learned their lesson about the too-much partying in Baltimore.

Kansas City had the best record in the American League this year.