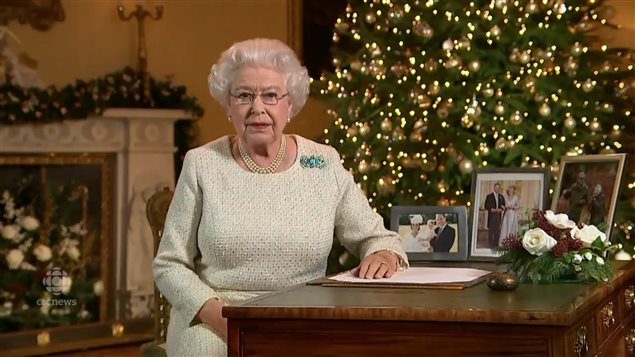 Be thankful for the “people who bring love and happiness into our own lives and look for ways of spreading that love to others,” urges the Queen in her annual Christmas message broadcast around the world.

“It is true that the world has had to confront moments of darkness this year,” the Queen said. “But the Gospel of John contains a verse of great hope often read at Christmas carol services: ‘The light shines in the darkness. And the darkness has not overcome it.'”

Few sights evoke more feelings of cheer and goodwill than the twinkling lights of a Christmas tree, she said, using the Christmas tree as a theme throughout her speech.

The Queen said that her great-great-grandparents, Queen Victoria and Prince Albert, helped inspire the custom of decorating a tree for Christmas.

Prince Albert chose to place an angel at the top to commemorate Christ’s birth.

“Despite being displaced and persecuted throughout his short life, Christ’s unchanging message was not one of revenge or violence, but simply that we should love one another,” the Queen said, recounting the story of his family’s exile and persecution, perhaps a veiled reference to the refugee crisis facing the world. “Although it is not an easy message to follow, we shouldn’t be discouraged.”

Gathering around the tree gives us a chance to think about the year ahead and “remember all that we have to be thankful for.”

One cause to be thankful was the marking of 70th anniversary of the end of the Second World War, she said.

“On VJ-Day, we honoured the remaining veterans of that terrible conflict in the Far East, as well as remembering the thousands who never returned,” the Queen said. “The procession from Horse Guards parade to Westminster Abbey must have been one the slowest ever, because so many people wanted to say thank you to them.”

The Queen also said she was thankful to see her youngest great-grandchild, seven-month-old Princess Charlotte, the youngest member of the royal family participating in the annual tradition of decorating Christmas tree.

The Queen remembered an old saying, that “it is better to light a candle than curse the darkness.”

“There are millions of people lighting candles of hope in our world today,” she said. “Christmas is a good time to be thankful for them and for all that brings light to our lives.”