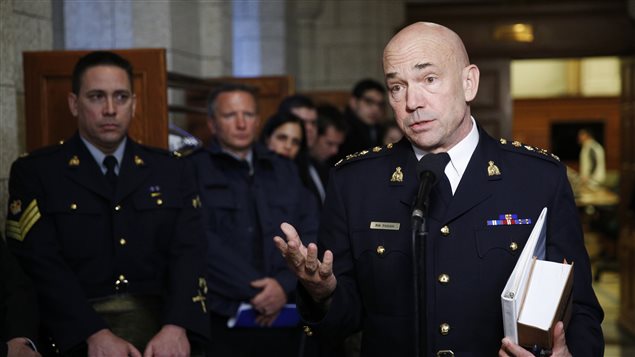 Police association fires back at RCMP chief over racism remark

RCMP Commissioner Bob Paulson made the remarks while responding to pointed questions about systemic abuse of Canada’s indigenous people after addressing members of the Assembly of First Nations, one of the main groups representing the country’s indigenous groups.

The RCMP is responsible for the policing of about 600 indigenous communities across Canada.

“I would encourage you all, though, to have confidence in the [discipline] processes that exist, up to and including calling me if you’re having a problem with a racist in your jurisdiction or any other problems.”

(click to listen to the interview with Rob Creaser)

“I believe like any other occupational group, whether it be doctors, lawyers, journalists, police officers, there are a minority of members out there that may hold racist views,” said Creasser.

“How is the public supposed to respect officers now, after their own Commissioner throws them under the bus?”

‘The tools are there’

The association is also concerned about the Paulson’s invitation to signal racist behavior by RCMP officers by calling him personally, Creasser said.

“He’s asking people to believe in the system that he says works and at the same time he’s offering – almost as if the system doesn’t work – to call him,” Creasser said.

If Paulson were serious about uprooting racism among certain members of the force, the RCMP Enhanced Accountability Act gives him “unprecedented powers” to sanction officers, Creasser said.

“The tools are there if the commissioner wants to use them,” Creasser said.

RCI was unable to reach a spokesman for the RCMP on Monday. However, in a statement to the National Post newspaper three weeks ago the force maintained that “those who don’t live up to our core values will be dealt with swiftly and justly.”

“Racism will not be tolerated in the RCMP. Public trust is essential for the RCMP to effectively serve and protect Canadians. As a result, RCMP employees must conduct themselves in a manner that not only meets, but exceeds, the rightfully high expectations of Canadians.”

The statement added that members receive cultural awareness training from the time they start at the training academy. “Classroom exercises provide cadets with an opportunity to understand issues related to aboriginal rights and culture,” it said.