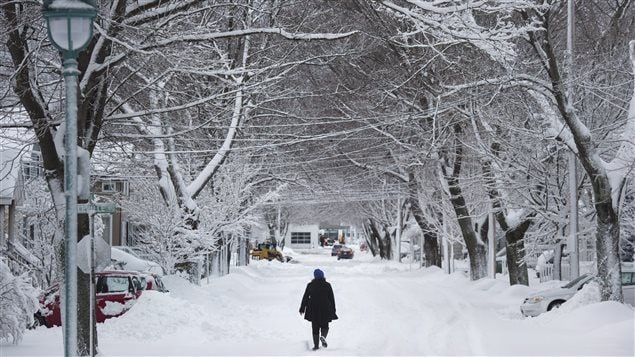 A woman walks in the middle of a snow-covered street following a snow storm in Halifax, Nova Scotia, today. A winter storm warning remains in effect for most of the Atlantic provinces following 15 to 25 centimetres of snow. Now blowing snow is the concern with winds gusting to 90 kilometres an hour.
Photo Credit: PC / Darren Calabrese

The Atlantic provinces of New Brunswick, Prince Edward Island, Nova Scotia and Newfoundland are digging out after a snowstorm left varying accumulations and knocked power out to many communities.

Known as ‘nor-easters‘ for the powerful north east winds that come off the ocean, these storms often bring daily life to a standstill.

In New Brunswick, schools and universities were closed as were many businesses. In Prince Edward Island, access to the Confederation Bridge was restricted due to reduced visibility and strong winds. The curved bridge, at 12.9 kilometres, is the longest in the world crossing ice-covered water,

In Nova Scotia, parts of the Trans Canada Highway were closed and ferry service to Newfoundland was halted. Most flights were delayed or cancelled until the storm subsided.

The weather system had moved over Newfoundland by day’s end but the prospect of gusting winds and blowing snow in most of the provinces make for a dangerous night with storm warnings still in effect, and people are being cautioned not to drive.