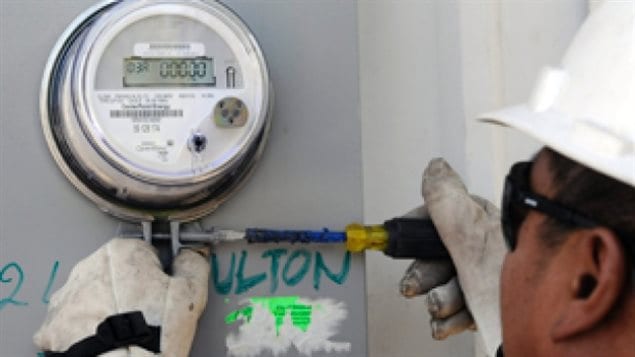 Three years ago, Hydro One’s installation of smart meters and a new billing system opened the gates to multiple problems with customers. Now the company admits the signals are not working properly in rural areas and will revert to manually meter reading.
Photo Credit: Canadian Press

Digital “smart” electricity meters, seem not so smart after all.

Just a few years ago, the major publicly-owned electrical power utility in Ontario, Hydro One, would send it’s inspectors around to read the meters on each dwelling.  Then came so-called “smart” meters.

These digital meters operated something like cell phones and electricity consumption could be sent continuously and directly in to the company for billing.

There are now almost 5 million smart meters in Ontario, but almost as soon as they began to be installed, there were complaints. Some people were overbilled, some didn’t receive bills for several months.

At this time last year, there were at least 9,700 complaints about billing.

Not only that but about 50,000 units of a brand called Sensus 3.2, were causing alarm due to the risk of fires and some 5,400 of the meters were replaced last year as a precaution.

In the prairie province of Saskatchewan, a number of minor fires resulted in the removal of a similar model, Sensus 3.3.

Now it seems Hydro One has admitted that the smart meters just aren’t working properly –they can’t send out reliable signals in rural areas- and has decided to pull the plug on the idea.  Some 36,000 meters in rural areas will now have to be read manually.

Lanark-area MPP Randy Hillier who represents a large rural area of eastern Ontario was quoted by Post Media saying , “I’ve been banging my head against the wall for the last five years, saying we’ve got problems with smart meters in rural Ontario. The evidence has been in front of us for a long time. It doesn’t work, it hasn’t worked and now (there’s) an admission that it will never work.”

The switch to smart meters to calculate continuous was mandated about five years ago and was to enabled continuous “time of use” billing in conjunction with peak and off-peak rates. These were designed to promote customer conservation by reducing electrical use in peak periods.

The original cost of installing the meters was to be $1-billion, but the actual cost turned out to be double that.

Across Canada there have been many complaints with the new technology, usually connected with a sudden increase in electrical bills.