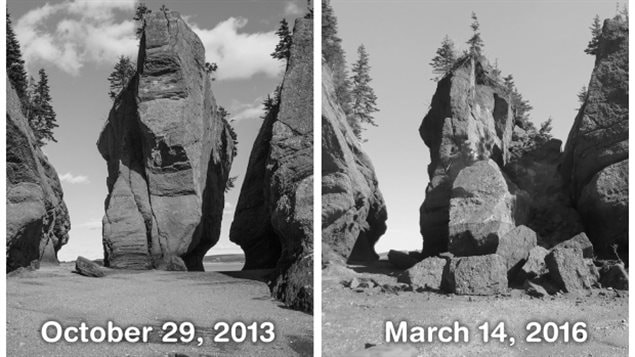 Elephant Rock, one of the most famous of the Flowerpot Rock formations at Hopewell Rocks, split on Monday morning. Local officials say the collapse is part of ongoing erosion forces from tides, rain and wind.
Photo Credit: Hopewell Rocks Park

Elephant Rock, is one, or was one of the most intriguing geological structures in what are known as the Hopewell Rock’s. They’re on the west side of the Bay of Fundy, which boasts the highest tides in the world. And it’s these tides that over time created the landmark.

The Elephant calved early yesterday, when 100 to 200 tonnes of rock fell to the ground. The pile beside it now blocks the path vistors would take around the natural monuments at low tide.

Also known as a flowerpot rock, it is one of 17 such formations on the Hopewell Rocks shoreline.  The sight is known to all in New Brunswick as it is depicted on the province’s Medicare card, and it is a draw to thousands of visitors and tourists each year.

Kevin Snair is supervisor of the park’s interpretive services. He told CBC News that this time of year the rocks are particularly fragile. He explained that when the snow melts, water flows into cracks, then freezes again when the temperatures drop at night, which weakens the stone.

Snair says the park sees more rock falls in the spring than any other time of year.

“It’s certainly sad and humbling to see us lose one of our named formations, or at least lose its identity, but it’s also very exciting,” said Snair.

“The whole park is formed by this exact action that happened today, so to be able to see that that is still happening, and the park is still evolving, it’s a beautiful thing, despite the loss.”