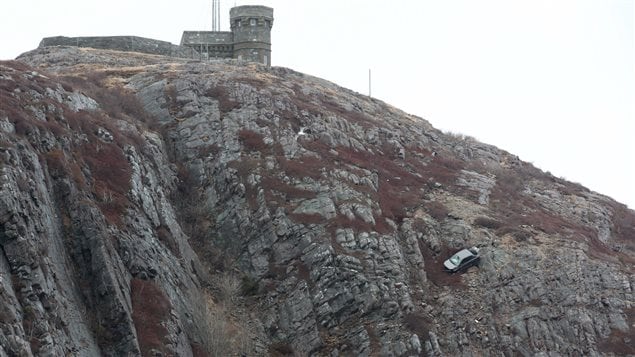 Signal Hill, in St. John's, Newfoundland, drew a lot of people Sunday morning, April 3, 2016 after a car landed at a precarious angle on the cliff. The 20 year-old female driver was ejected and remains in hospital with serious injuries.
Photo Credit: CP / Paul Daly

Signal Hill, in St. John’s, Newfoundland. was the scene of a spectacular event Sunday morning after a 20 year-old woman drove through a gate and over the clff. The car landed on a precarious angle and the driver was thrown out.

She is in hospital with serious injuries and police would not comment on her condition today, or her identity.

A high angle recovery team removed the vehicle, a grea Toyota Echo, Sunday afternoon. It was a timely operation as the city is enduring a spring storm today that has many schools closed with winds reportedly gusting to as high as 120 kilometres an hour.

Signal Hill overlooks the harbour city of St. John’s. The hill got it’s name from its function down through the ages. Flag communication between land and sea took place from there from the 17th century until 1960.

In 1762, the Battle of Signal Hill, was the turning point in which the French surrendered St. John’s to a British force under Lt. Colonel William Amherst. Amherst renamed what was known at the time as “The Lookout” as “Signal Hill,” because of the signalling that took place upon its summit from its flagmast.

But the other memorable “signal” was Marconi’s. The hill was the location of the first transatlantic wireless transmission. On December 12th, 1901, Guglielmo Marconi received the first signal, in an abandoned fever and diphtheria hospital, which has since been destroyed by fire. The transmission, an “S” in Morse code, was sent from from his Poldhu Wireless Station, in Cornwall, UK.

The iconic Cabot Tower at the top of the hill was built to commemorate Queen Victoria’s Diamond Jubilee in 1897, as well as the 400th anniversary of John Cabot’s arrival in 1497.