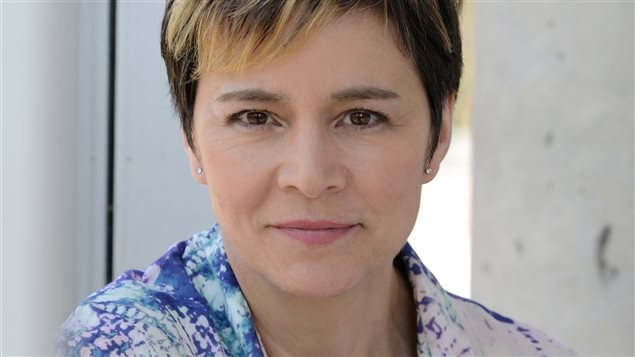 Anne-Marie MacDonald, writer, actor and playwright, is winding up her year at Concordia University in Montreal, as the first Mordecai Richler writer-in-residence.

In a talk at Concordia las night MacDonald shared the honour she felt, being invited into the position. One, with her theatrical talent, she’s handled with great aplomb. From video dispatches, to her great ease on stage last night, she leaves big shoes to fill, for the next Richler writer-in-residence.

MacDonald reminisced on the role of Richler’s, ‘The Apprenticeship of Duddy Kravitz” on her teenage life. She was honoured again, she says, when subsequently asked to write the forward to the recent edition of the book.

Concordia University and Mordecai Richler‘s family established the ‘Mordecai Richler Reading Room’ in 2013. Located on the downtown campus, the cozy room, lined with bookcases, contains everything from Richler’s much-loved books, much-used, and perhaps abused, typewriters, to his pictures, photos, a passport, and even his ashtray.

Mordecai Richler attended Sir George Williams, one of Concordia’s founding institutions, from 1949 to 1951. He was writer-in-residence in 1968 and 1969.

Ann-Marie MacDonald’s first novel, ‘Fall on Your Knees’, was an international best seller. In 2002 it became an Oprah’s Book Club selection and has been translated into 19 languages.