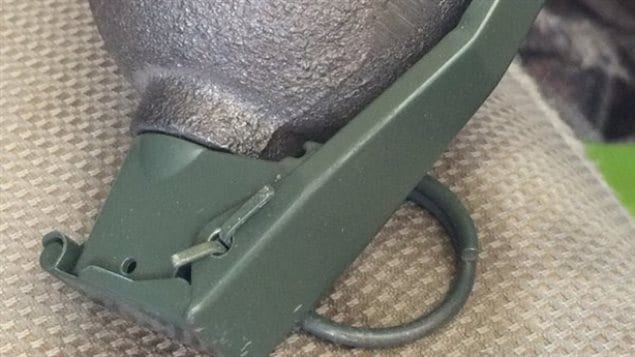 Canadian border guards in B.C. found what looks like a grenade during a check on Thursday.
Photo Credit: CBC/Abbotsford Police Department

Three people are in custody at a Canada-U.S. border crossing in British Columbia after a suspected explosive device was found in their car Thursday afternoon.

The trio was attempting to enter Canada at the crossing between Abbotsford, B.C. and Sumas, Wash.

A Royal Canadian Mounted Police Explosive Disposal Unit was called and the crossing was closed for about an hour.

The Canadian Border Services Agency has not disclosed the names or nationalities of the travellers and it remains unclear if the the device was real or live.

Meanwhile, two Ontario men appeared in court in Toronto Thursday after being detained last week when they allegedly tried to travel to “international conflict zones” to participate in a terrorist group.

Their case was put over to May 20.

The RCMP says the two men have been released on certain conditions and are not currently charged with any criminal offences.