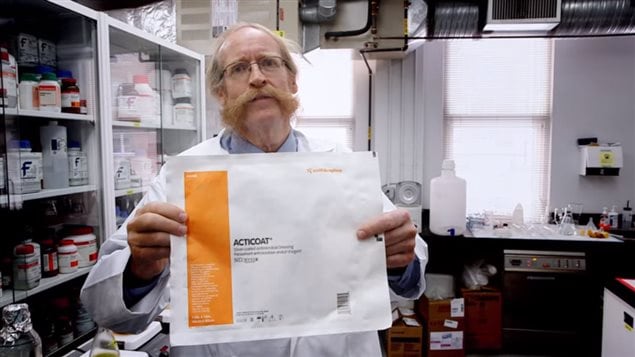 Professor Robert Burrell of the University of Alberta has won a prestigious Governor-General’s Innovation Award for the world’s first therapeutic use of nanotechnology.

Professor Burrell used nano-technology on a wound bandage that has already begun transforming treatment of wounds in situations around the world.

In his research prior to joining the University in 2002, Burrell created a coating of nano-crystals of silver which not only kills bacteria but also has anti-inflammatory properties.

The technology has been used to create wound dressings which have been used hundreds of thousands of times already, saving lives and limbs around the world in treatment of wounds and burns. He also says it helps to reduce scarring.

Professor Burrell says he and his team hope to develop the technology further in order to deliver it to site specific areas such as in the lungs or bowel. He also hopes to develop it for cancer research and treatment perhaps as an anti-cancer drug.

The new Governor-General’s Innovation Award, one of six given out this inaugural year, is just the latest in a series of awards for the researcher including the 2010 Jonas Salk Award—a lifetime achievement award presented annually to a Canadian scientist, physician or researcher who has made a new and outstanding contribution in science or medicine to prevent, alleviate or eliminate a physical disability.