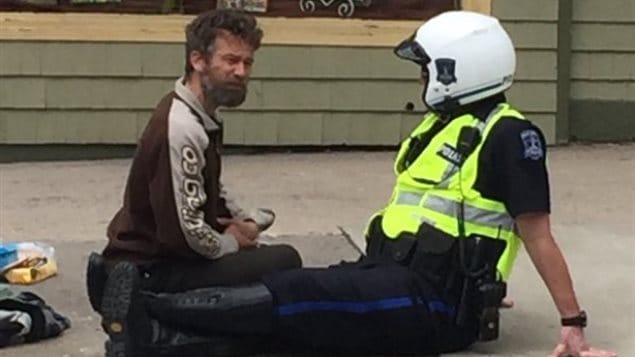 The sight of Const. Shaw Currie talking to a street person so impressed passerby Brun Baurin that he took a photo and tweeted it.
Photo Credit: Bruno Baurin/Twitter

Police and panhandler photo a hit on social media

A passerby was so impressed to see a Canadian police officer sitting on a sidewalk with a panhandler that he snapped a photo and posted it on social media. Canada may be a wealthy country but it has its share of poor people who ask for money on its streets. How well they are tolerated depends on the jurisdiction.

Police in the eastern city of Halifax have been making an effort to get to know panhandlers and some have formed close relationships.

“We were just talking about what’s going on in his life right now. I’ve known him for nine years,” said Const. Shawn Currie to CBC reporter Jennifer MacMillan.Currie added he considers it part of his job to help people solve their problems.

It’s not the first time a photo of Currie has made the rounds on twitter. Last year, a photo was posted of him giving a pretend ticket to a three-year-old boy on a plastic motorcycle.

Remember, no motorcycle parking in the circle by the ferry terminal. This ruthless biker was caught yesterday ! pic.twitter.com/GgzU4j46vy