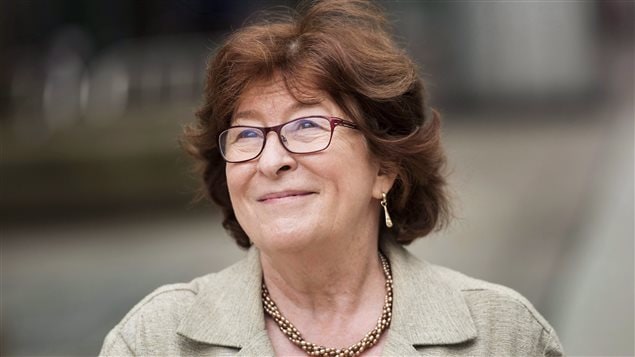 Louise Arbour, former Justice of the Supreme Court of Canada and the United Nations High Commissioner for Human Rights, smiles after having her star unveiled on Canada’s Walk of Fame in Toronto on Monday, June 8, 2015.
Photo Credit: PC / Darren Calabrese

Noted Canadian jurist Louise Arbour has been awarded a prestigious and lucrative international prize for her work in promoting the rule of law and championing human rights both in Canada and on the international scene.

“The Selection Committee for the Rule of Law nominated Madam Arbour in recognition of her enduring contributions to international criminal justice and the protection of human rights, as well as her work in promoting peace, justice and security in Canada and abroad, to expand the frontiers of freedom for all,” said in a statement Dr. Jenn-Chuan Chern, CEO of the Tang Prize Foundation.

“The Selection Committee notes in particular that, through her extensive juridical and academic work, Madame Arbour has facilitated the conceptual developments of legal regimes that are fundamental to human rights and international peace and justice, addressing a wide range of liberties and gender issues.”

The Tang Prize is an international award founded in 2012 by Taiwanese billionaire and philanthropist Samuel Yin, who says he was inspired in part by the Nobel Prize. Arbour has been named laureate in the Rule of Law category.

Speaking to RCI from the offices of Montreal-based law firm Borden Ladner Gervais LLP (BLG) where she is a counsel and jurist in residence, Arbour said she was surprised and flattered by the award.

“First of all I had to recover from the shock but after that it feels absolutely wonderful,” Arbour said.

(click to listen the full interview with Louise Arbour)

She has worked all her life towards the advancement of the rule of law – equality before the law, equal protection and benefit of the law for everyone – in Canada or abroad, Arbour said.

Looking back at her own career, Arbour said her work at the International Criminal Tribunals for the former Yugoslavia and Rwanda got the most attention because “essentially it was pioneering work.”

“It was very early, it was 20 years ago when international criminal justice was still was very much an experiment, quite fragile actually, and required a lot of strategies and vision, I suppose, and faith for the most part,” Arbour said. “But I often feel that the work I did even as a trial judge may not have had the same kind of visibility, but for the people who appeared in court in front of me I felt that for them that case sometimes was the most important thing in their life.”

One of the biggest challenges facing the ICC today is the lack of universality, Arbour said.

“It’s the fact that the court does not have jurisdiction everywhere,” Arbour said. “And so the court appears very impotent when it’s unable to initiate any kind of proceedings in some of the worst places where violations of the laws of war – genocide, war crimes, crimes against humanity – are being perpetrated.”

The reason for this is that the ICC has been created by a treaty to which member states of the United Nations are free to sign up, she said.

“And unfortunately, until we have all members of the United Nations inside the jurisdiction of the court, it will always look either selective or distracted away from some of the most egregious violations,” Arbour said.

But Arbour said she believes concluding cases such the recent landmark conviction and sentencing of Congolese ex-rebel leader Jean-Pierre Bemba, who has been jailed for 18 years for war crimes and sexual violence, will enhance the ICC’s visibility and credibility.

Not a footnote in history

Still, she said she holds little hope that key nations such as the U.S., Russia, China and India will join the court.

“This will always be, I think, a serious shortcoming for the court,” Arbour said. “But all we can do is advocate for states to join the court… I think we can only try to persuade those who are still outside to come in so as to make sure that the court doesn’t look like a footnote to history.”

Arbour said she hasn’t decided yet what she will do with the $1.6 million cash prize and the $397,000 grant that comes with the award.

“This is all new and, of course, the entire event will take place in Taipei in September,” Arbour said. “I think I have time and I hope to have a conversation with the administrators of the Tang Foundation to get some sense of what others have done in the past and to reflect how best to dedicate that money.”