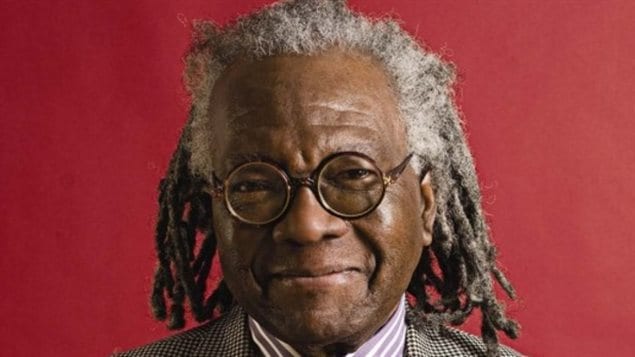 Austin Clarke, the Canadian writer, was born in St. James, Barbados, on July 26, 1934. He came to Canada in 1955 as a student at the University of Toronto. But he soon left to pursue a career in broadcasting and eventually became a leader in North America’s civil rights movement. Always a writer, he completed his first novel, The Survivors of the Crossing, in 1964.

“Writing has been a mainstay and the most important aspect of my life. It shall continue this way until I die.”

In the early 1970’s he taught creative writing at several American universities and was also the cultural attaché to the Barbadian embassy in Washington.

He became the general manager of the Caribbean Broadcasting Corp., when he returned to Barbados in 1975. The following year he returned Canada and ran unsuccessfully as a Progressive Conservative candidate in the 1977 Ontario provincial election.

Clarke served on a number of community boards including the Refugee Board, and continued to write about the West Indian immigrant experience in Canada.

His Caribbean characters and their struggles against racism and economic exploitation are the subjects of The Meeting Point. The same characters return in Storm of Fortune (1971) and The Bigger Light (1975) making these novels a trilogy. Clarke’s characters resonate with the authentic dialogue and dialects, in believable situations with subtle psychology.

In Canada he may be best known for his novel The Polished Hoe, which won the prestigious Scotiabank Giller Prize in 2002. It is the story of Mary-Mathilda, an elderly woman who confesses to the murder of the plantation owner who’d made her his mistress, many years before, recounting the tale to a police officer over a single evening.

In his acceptance speech, after thanking his publisher, he credited his wife, saying he could not have done it without her support. He revealed that about 40 years ago he had told her he wasn’t going to work anymore.

“And like a real Jamaican woman she said ‘What are you going to do?’ And I said ‘I want to be an artist.’ The scream she emitted was heard in Jamaica, where her mother lived at the time.”

The Polished Hoe also won the 2003 Commonwealth Writers’ Prize for Best Book Overall and the 2003 Trillium Book Award, an honour in the province of Ontario.

In a CBC interview by other Canadian writers, Clark said “Writing has been a mainstay and the most important aspect of my life. It shall continue this way until I die.” He also chose The Survivors of the Crossing as his favourite.

His most recent book, a memoir called “Membering”, was published last year. In 1998 Clarke was made a member of the Order of Canada. A large funeral service will take place July 9th, at Toronto’s St. James Cathedral.