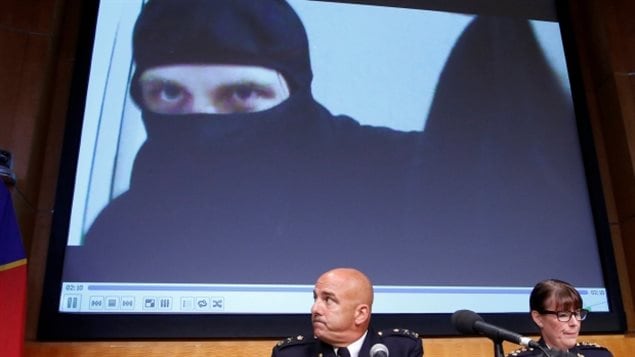 video of Aaron Driver, who was killed Wednesday in a confrontation with police, is projected on a screen during an RCMP news conference on Thursday.
Photo Credit: Reuters / Chris Wattie

Prime Minister Justin Trudeau is praising and expressing gratitude to the RCMP for its handling of the potential terror attack in the small Ontario town of Strathroy that ended in the death of 24-year-old Aaron Driver.

Acting on a tip from the FBI, the RCMP identified Driver as the man in a so-called “martyrdom video” and moved to Strathroy to confront him Wednesday afternoon.

It remains unclear if Driver was killed by the bomb or from the police bullets.

On Thursday, ISIS’s medInvestigation continues into Aaron Driver’s life and deathia arm described Driver as a “soldier of the Islamic State” whose only error was posting a video before carrying out the attack.

Authorities say Driver was under a peace bond after catching the attention of Canada’s spy agency, CSIS, for tweeting support for ISIS under the alias Harun Abdurahman in October, 2014.

That’s the same month two Canadian soldiers were killed by Canadians in separate incidents in Ottawa and near Montreal in what police said were ISIS-inspired attacks.

Under Canadian law, a peace bond is an order from a criminal court that requires a person to keep the peace and be on good behaviour for a period of time, meaning he must not be charged with any additional criminal offences during its duration.

Crown prosecutors usually issue peace bonds when they are convinced that a strong case does not exist against the accused.

Strathroy, a town of about 20,000 residents, is located just west of the city of London in southwestern Ontario.