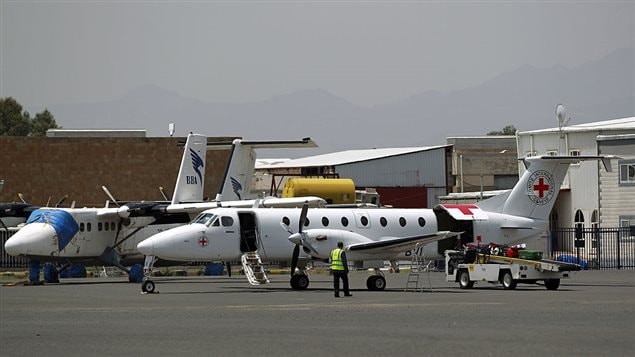 Yemeni workers unload an aircraft of the International Committee of the Red Cross (ICRC) upon its arrival at Sanaa’s International Airport on August 16, 2016 after the airport reopened to air flights of the United Nations and other international humanitarian organisations.
Photo Credit: GI / MOHAMMED HUWAIS

Twelve humanitarian aid agencies are calling on the Saudi-led coalition battling Yemeni rebels to lift “inexcusable” restrictions on the country’s airspace in order to allow the resumption of humanitarian and commercial flights to the international airport in the capital Sanaa.

The airport in the rebel-held capital was closed last week, when coalition jets resumed air strikes around Sanaa following the breakdown of UN-brokered peace talks between the Yemeni government supported by Saudi Arabia and its Gulf allies, and Iran-backed Houthi rebels.

“The humanitarian organizations were concerned that the airspace was closed for humanitarian and commercial flights,” Wael Ibrahim, a Canadian citizen and country director for CARE International, told RCI in a phone interview from Sanaa. “The only way in and out not only for the international community but also Yemenis is by air.”

(click to listen the full interview with Wael Ibrahim)

The closure of the airspace makes it even more difficult for aid agencies to get help to those that desperately need it, cutting off an important humanitarian assistance lifeline, aid agencies said in their joint statement.

“All parties to the conflict must ensure that they allow humanitarian aid to reach the Yemeni population, in line with their obligations under international law.”

The Saudi-led coalition battling the Houthi rebels said it would allow humanitarian flights into Sanaa’s international airport from Monday but its statement made no mention of commercial flights operated by national carrier Yemenia, which until last week had been the sole operator still serving Sanaa.

“We’re delighted that authorities have reopened the airspace for humanitarian flights but we remain very concerned that this has not been the case for commercial flights,” Ibrahim said. “Thirty per cent of passengers on Yemenia are people who need medical attention.”

With the difficulties in maintaining a high standard of care in the country’s war-ravaged health facilities, many Yemenis depend on the commercial flights to get appropriate and often life-saving healthcare in other countries, Ibrahim said. In addition, Yemeni entrepreneur rely on the carrier to continue operating their businesses and provide much needed employment in the country.

Over 14 million Yemenis are in need of food aid as a result of the conflict, which began in March 2015 after the Shiite rebels and allied military units seized Sanaa and large swathes of central and northern Yemen, forcing the government of President Abd Rabbuh Hadi to flee the capital.

One-third of Yemeni children under five years old – approximately 1.3 million – are suffering from acute malnutrition, according to CARE.

The United Nations estimates that at least 6,500 people – half of them civilians – have been killed in the fighting between the Saudi-led coalition and Yemeni rebels.

Both sides of the conflict have been accused of committing war crimes and crimes against humanity with indiscriminate shelling, targeting of schools and hospitals and using blockades to starve opponents.

CARE is one of 40 international NGO’s currently operating in Yemen, Ibrahim said. The agency operates in seven governorates and its programs focus around the delivery of food, food security, water and sanitation, income generation and vocational training, he said.

“In assessing those in need, food and water and sanitation rank among the top needs,” said Darcy Knoll, a spokesperson for CARE Canada. “Nearly a year of fighting and fuel shortages has destroyed water pipes and water pumping facilities, so CARE is rehabilitating water sources and providing water tanks so women and children do not have to travel long distances to collect water.”

CARE is also providing hygiene kits and promotion, paying special attention to women’s needs. To assist people in making ends meet, CARE is distributing food and cash vouchers to displaced families so they can pay rent and purchase in the local market the food and hygiene items their family needs, Knoll said.