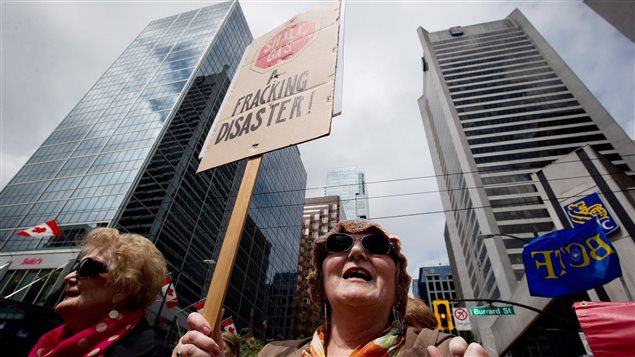 Protesters worried about the effects of fracking marched in the western city of Vancouver on May 23, 2014.
Photo Credit: Darryl Dyck/Canadian Press

Officials at western Canada’s BC Hydro worry that earthquakes caused by fracking may put large hydroelectric dams at risk, according to documents obtained through Access to Information law.

Hydraulic fracturing, or fracking, is the practice of injecting fluid at high pressure deep underground to force out natural gas or methane. Critics say the process pollutes groundwater and causes earthquakes.

That’s not good enough for Canadian Centre for Policy Alternatives analyst Ben Parfitt. He told CP those restrictions are little more than a gentleman’s agreement and he wants tougher rules on zones where fracking would be banned.