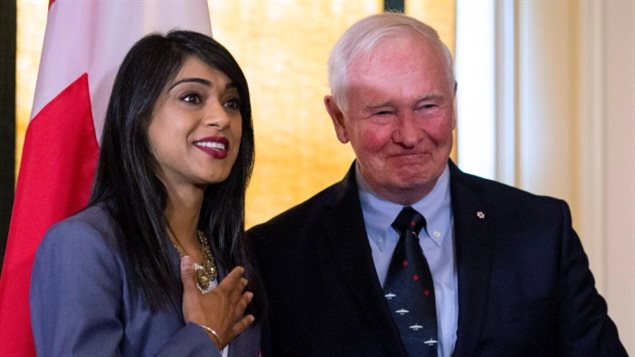 Bardish Chagger, Minister of Small Business and Tourism, stands next to Governor General David Johnston after being sworn in as Leader of the Government in the House of Commons at Rideau Hall on Friday, Aug. 19, 2016 in Ottawa.
Photo Credit: CP / Justin Tang

Bardish Chagger is the new government House Leader in Ottawa.

The Member of Parliament for Waterloo, Ontario, she was named Minister of Small Business and Tourism after being elected for the first time last October. Bardish Chagger was sworn-in as House Leader at Rideau Hall on Friday.

“I have never been a stranger to hard work.”

Chagger is the first woman, and the first of South Asian heritage, to hold the position in Canadian history. Born and raised in the Waterloo region, she attending the University of Waterloo where she was the president of the Young Liberals.

After graduating, she worked as an assistant to former Kitchener-Waterloo MP Andrew Telegdi for four years before becoming a community organizer in 2009.

When asked, in a press conference Friday afternoon, how she was going to manage all the responsibilites, she replied, “I have never been a stranger to hard work.”  She began her political life in the 1993 election as a volunteer when she was 13

Her French responses were a little rusty, but she vowed to brush up on her immersion education and will be working with a teacher to be more comfortable in both of Canada’s official languages, english and french.

She will make her debut on the new job on September 19, 2016, when Parliament gets back to work in Ottawa, following the summer recess.

She takes over the position of leading the government’s agenda through Parliament from Dominic LeBlanc from New Brunswick. He remains in the fisheries portfolio he assumed following Hunter Tootoo’s resignation in the spring.

Tootoo left the fisheries post and resigned from the Liberal caucus to seek treatment for addiction. He later said the move came after an “inappropriate” relationship with a staffer.