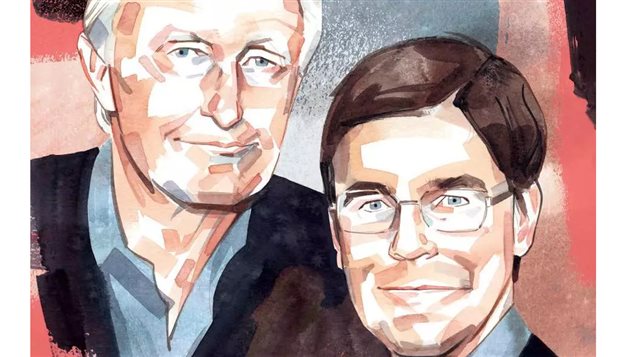 A portrait of Father and son: W. Galen Weston handed over the reins to son Galen Jr. at the top of one of Canada's oldest and most successful companies.

Changes at the top of Loblaws. and the company that owns Selfridges, Holt Renfrew, Brown Thomas in Ireland and de Bijenkorf in the Netherlands.

“Following my own father’s tradition of stepping down at the age of 75, I see this as a good time to create space for the next generation,” said W. Galen Weston. “I have absolute confidence in my son and the George Weston Limited board and leadership. I look forward to using my time to focus on the exciting opportunities ahead in our luxury business and some truly ground-breaking potential with our charitable foundation.”

Galen G. Weston, 43, is now the fourth generation of family leadership. He has been Executive Chairman of Loblaw since 2006 and Deputy Chairman of George Weston Limited since March, 2016. His sister, Alannah Weston, was appointed a director on the board earlier this year

“Reaching a fourth generation represents unique longevity among family-led firms, and my father’s success over four decades sets a high bar for the next generation of our business,” said Galen G. Weston. “We will benefit from the strong legacy traits of Weston companies, and my sister and I look forward to our father’s continued guidance and support.”

George Weston Limited, founded in 1882, is a Canadian public company and through its operating subsidiaries is now one of North America’s largest food processing and distribution groups. George Weston Limited has two reportable operating segments: Weston Foods and Loblaw, which is operated by Loblaw Companies Limited.

The Weston Foods operating segment is primarily engaged in the baking industry within North America. Loblaw is Canada’s largest food distributor, a major provider of general merchandise, as well as drugstore and financial products and services.

The purchase of Shoppers Drug Mart in 2013 was a move that garnered the younger Weston respect in the business community and is viewed as a first step in an intended major role in the distribution of medical marijuana.