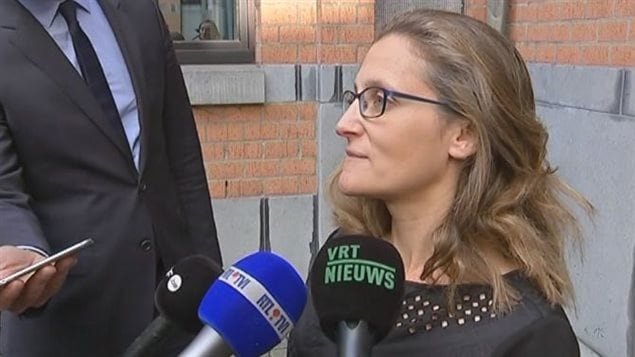 Last-minute talks between Canada and the European Union to salvage a landmark free trade deal have failed, Canada’s International Trade Minister confirmed in an emotional statement to the media as she walked out of the negotiations in Belgium today.

The Comprehensive Economic and Trade Agreement (CETA) was supposed to be signed at an EU-Canada summit next week. However, the deal, which would have removed 98 per cent of tariffs and trade barriers between Canada and 28 EU member states, was blocked by the Belgian region of Wallonia.

Fighting back tears, Freeland said she had worked very hard to secure the deal but realizes now that it won’t happen.

“Canada is disappointed and I personally am disappointed, but I think it’s impossible,” Freeland said. “We are returning home. At least I will see my three children tomorrow at our home.”

However, the German Press Agency, dpa, quoting an anonymous source, said the European Commission, which negotiates trade deals on behalf of the EU, “doesn’t consider that this is the end of the process.”

We have engaged wholeheartedly w Wallonia the last days. Truly sad talks have been halted. Still hope to find solution in order to sign CETA

Officials at the Prime Minister’s Office also refused to confirm or deny whether Prime Minister Justin Trudeau who was hoping to officially sign the deal at an EU-Canada summit in Brussels on October 27, has cancelled plans to travel to Belgium.

Paul Magnette, the president of Wallonia, briefed his regional parliament, saying that although talks were productive, difficulties remain and he’s not prepared to reverse the decision to reject CETA.

European Council President Donald Tusk said he was concerned that “a good trade agreement with a close partner like Canada” had failed.

‘A good day for democracy’

But opponents of the controversial deal that saw hundreds of thousands of Europeans taking to the streets in protest welcomed Wallonia’s hard line.

“Yes, you can say that this is a good day for democracy,” said Maude Barlow, who heads the Council of Canadians, a citizens’ advocacy group opposed to the deal. “Wallonia was expressing the concerns of millions with its courageous stand. Now it is back to the basics to negotiate trade based on the values of sustainability and justice instead of greed and power.”

Sujata Dey, Trade Campaigner with the Council of Canadians, who is currently in Belgium to campaign against the deal, said it’s time to take a “long hard look” at CETA and what the impasse means for other controversial deals like the Trans-Pacific Partnership.

“It’s time for a fundamental shift toward international agreements that put people and the planet before corporate profits,” Dey said in an email. “That’s the message from Europe today.”