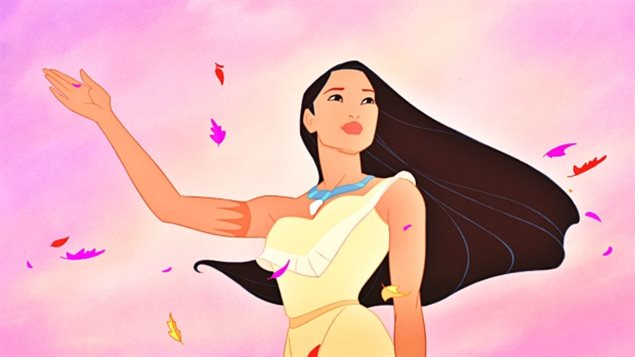 Pocahontas, the Disney film, is objected to for sexualizing a 12-year-old who was eventually kidnapped by the English and held for ransom. She died at the age of 23.
Photo Credit: CBC (Walt Disney Pictures)

“I Am Not a Costume” campaign succeeding

The Kahnawake Youth Forum, of the Mohawk community across the river from Montreal, is at work again this year, trying to educate their neighbours about the offensiveness of “Indian” costumes for Hallowe’en.

“Going into a store you’re seeing images that are supposed to be you but they’re not, they’re not at all!”

Jessica Deer, a resident of Kahnawake and member of the Youth Forum, says they call it, “Red Face”.  The group made a list of the many ways these costumes are marketed with monikers such as “Huron Honey”, “Rain Dancing Diva” and “Reservation Royalty”.

Working with the group, Missing Justice, young people from Kahnawake will distribute letters this afternoon, to shopkeepers and stores that stock these costumes. The intention is to inform these business people, helping them understand why the outfits are offensive. Stickers, stating “I Am Not a Costume” will also be available as part of an ongoing three-year social media campaign to raise awareness.

Over this weekend across Canada there will be thousands of parties and gatherings for adults sporting all manner of dress-up for the annual autumn occasion of Hallowe’en. It is hoped fewer of those costumes will include the stereotype of the so-called ‘Indian warrior’ or ‘Indian princess’.

“We all love Hallowe’en too”

On Monday night, as children go door to door, ‘trick or treating’ they will be dressed up as their super-heroes, or scary monsters, and a wide variety of princesses, but hopefully the Disney version of Pocahontas will not be among them.

“We all love Hallowe’en too”, Jessica Deer says, “it’s just discouraging when, you know, we’re excited about this time of year and wanna’ dress up but, going into a store you’re seeing images that are supposed to be you, but they’re not, they’re not at all”.

What Missing Justice and the Kahnawake Youth Forum is working toward, is making the idea of dressing up as an “Indian” as socially unacceptable, as going out dressed up in blackface, mimicking a black person, has come to be.

Jessica Deer says these costumes are not accurate, they’re misrepresentations and rooted in colonial ideology.

“You know, the feather and the fringe, something that you’d see in an old spaghetti western and that really kind of erases contemporary indigenous people’s presence in society, right?”

A Tribe Called Red, the indigenous DJ collective. is an electronic band that blends hip hop and indegenous sound to fantastic effect,  The trio has been a leader in drawing attention to these forms of cultural appropriation. They ask their fans to leave the headdresses at home explaining their offensiveness.

Jessica Deer says the group has provided strong role models that have empowered the younger generation of indigenous people to speak up and take action.

“We need people like the guys in ‘A Tribe Called Red’ saying that stuff on a national platorm because it helps empower us to make change in our own communities.”

There is evidence that the change is happening. Last year Waneek Horn-Miller raised objections to some costumes in a store in Ottawa, Ontario. Initially she was dismissed and left the shop very angry. The store owner, however, contacted her the following day, wanting to know more.

For more on the event: