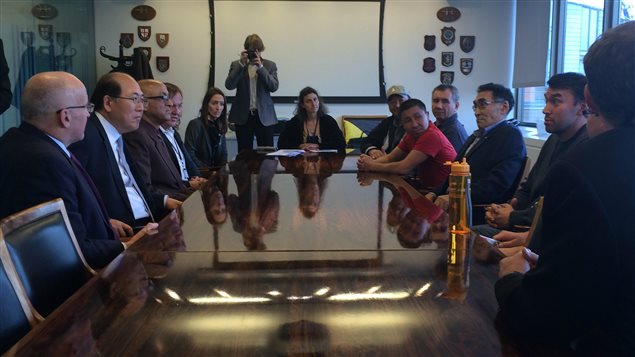 The International Maritime Organization (IMO) in London heard this week from Arctic Indigenous leaders who lobbied the UN body for a permanent seat at the table and spoke about their concerns over the impact of increased shipping on the environment and the food security of northern communities.

Six Arctic Indigenous leaders from Alaska, Canada, and Russia, accompanied by representatives of an environmental coalition campaigning for sustainable shipping practices in the circumpolar regions, had a meeting with the IMO Secretary General Kitack Lim and participated in the shipping regulator’s Marine Environment Protection Committee plenary sessions.

Tagak Curley of Rankin Inlet, Nunavut, said each one of them talked about the potential impacts of increased Arctic shipping on their community.

Worried about ‘catastrophic incident’ with HFO

“We each made our cases,” Curley said in a telephone interview from London. “From Canada’s side we indicated food security, as well as that heavy oil used by major vessels should be banned from the Arctic. We have the most to lose because the food security of our community is depended primarily on the sea mammals.”

(click to listen to the full interview with Tagak Curley) 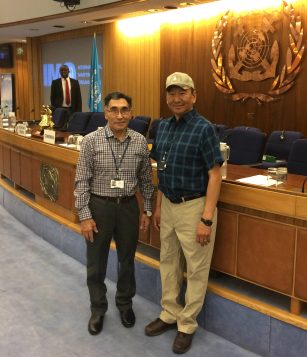 Tagak Curley of Rankin Inlet, Nunavut, and Hans Lennie of Inuvik, N.W.T. at the IMO meeting in London in October 2016. (Photo: Andrew Dumbrille)

Canadian Inuit are worried about the environmental impact of “a potential catastrophic incident” such as a major oil spill from a ship that uses heavy fuel oil, said Curley, a founding member and the first president of the Inuit Tapirisat of Canada, a non-profit organization in that represents over 60,000 Canadian Inuit.

The issue of heavy fuel oil (HFO) was discussed by the IMO on Friday.

“It’s clear from deliberations at the IMO today, heavy fuel oil use by ships in the Arctic will be on the agenda for potential future phase out,” said Andrew Dumbrille, senior specialist in sustainable shipping at World Wildlife Fund (WWF) Canada.

In an unusual intervention, the IMO secretary-general echoed comments from Canada, U.S., France, Sweden, Iceland, the Netherlands, Finland and Norway in calling for serious efforts by member states of the IMO in dealing with the risks and impacts from the use of “the world’s dirtiest fuel, HFO,” Dumbrille said.

“Commitments from Arctic states and others at this week’s IMO meeting, along with the historic decision to maintain the 2020 cap on sulphur emissions, has set the table for transitioning away from HFO,” Dumbrille said. “It’s now time for concrete action from the IMO and the development of a workplan to set a timeline to phase out HFO in the Arctic.”

Impact of shipping on food security

Arctic Indigenous groups are also worried that noise, pollution and disturbances created by increased shipping traffic will have serious impacts on food security of northern communities that rely on sea mammals for sustenance.

“These are the issues that we are the most qualified to speak on because our wildlife, our sea mammals, they are all going to be impacted by increased traffic,” Curley said. “We are here to tell our side of the story… We have the most to lose.”

Increased shipping traffic is already affecting marine mammals such as belugas, narwhals and bearded seals the Inuit depend on for survival, Curley said.

The noise emitted by large vessels disturbs marine mammals and forces them to change their migration routes, making it more difficult for hunters to get to them, Curley said.

“As soon as the ice opens up, the belugas and narwhals, and bearded seals, and smaller seals they are heading into their breeding areas,” Curley said. “So the moment the increased traffic happens, our food security is impacted, so that has to be taken into consideration by the IMO.”

The Arctic Indigenous leaders from Alaska, Russia and Canada will continue to lobby the IMO to have a permanent voice in the UN body, Curley said.

In the meantime, they will keep their informal discussions going on every month to make sure they share information and coordinate their actions, Curley said.

“The Arctic voice is very important,” he said. “It’s been heard now. It’s not going to stop.”