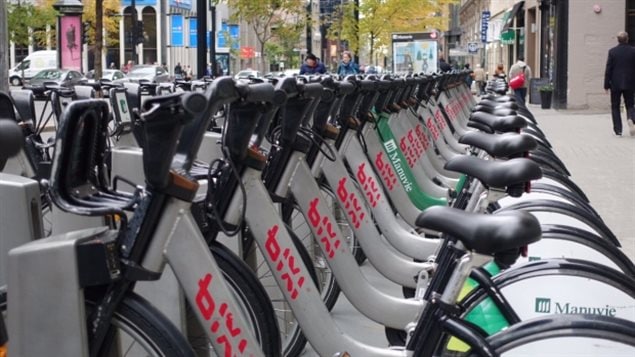 Bixi Montreal will store its bikes for the winter at midnight tonight, but there will be 1,000 more bikes and 80 more docking stations when the 2017 season begins next spring.
Photo Credit: CBC / Charles Contant

Bixis, the public bikes in Montreal, are going into storage for the winter. Today was the last day to hop on a bike that has been the model for so many other programs around the world.

Bérengère Thériault, a spokeswoman for the city’s bike-sharing service, told CBC News that removing the bikes and the stations takes a few weeks.

“A lot of our stations are on the street, so it’s important for people to [be able] to remove the snow,” Thériault said.

The company, which filed for bankruptcy and restructured two years ago, has been growing steadily since.

In October Bixi announced that it will expand next year, with 1,000 more bikes and 80 more docking stations across the city.

What Montrealers know as the Bixi, was designed by the city’s award-winning industrial designer, Michel Dallaire.

PBSC Urban Solutions, the Quebec company, along with Devinci bikes, supplies several cities around the world for their local ride-sharing programs.

There are an estimated 50,000 bikes and 3,500 stations in 15 cities and two university campuses, worldwide.