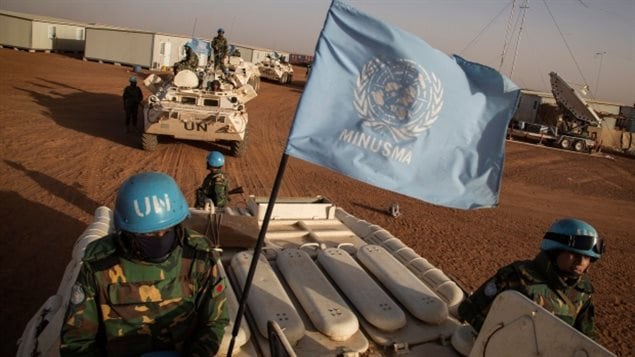 UN peacekeepers arrive at a base in Mali in 2015. Parts of the country have been unstable since falling to Tuareg separatists and then Islamic extremists following a military coup in 2012
Photo Credit: (Marco Dormino/United Nations/Associated Press)

In addition to contributing millions of dollars to UN peacekeeping, the announcement indicated Canada would commit some 600 soldiers and additional police to a United Nations mission in Africa.

All signs seem to point to a mission to Mali where the Canadian defence minister visited this month and where a Canadian reconnaissance team also visited earlier.

That country has been in a state of war and conflict for the past five years, with terrorists and rebel factions having killed some 100 UN peacekeepers since 2013, after French and Mali forces pushed back against radical Muslim forces which had taken over a large area of northern Mali.  Some 30 peacekeepers have been killed this year alone

A new report by a British organization called Conflict Armament Research indicates there is a wide range of heavy and sophisticated arms in the region. The organization’s research is funded largely by British, German and EU governments.

The report says the various rebel factions have access to a wide range of weapons including shoulder launched guided missiles (MANPADS-man portable air defence system),  anti-tank landmines, and rocket propelled grenades in addition to a variety of machine guns and small arms.

According to the study, much of the sophisticated armaments came when Libya’s Ghaddafi regime fell and its vast arms stockpiles were looted.  Other sources point to China and Iraq, and analysis indicates a similarity of the weapons supply chain for both  Mali and Daesh in Syria.

In spite of several indications that Mali is to be the mission for Canada, the government has not yet confirmed the destination for Canadian peacekeepers.