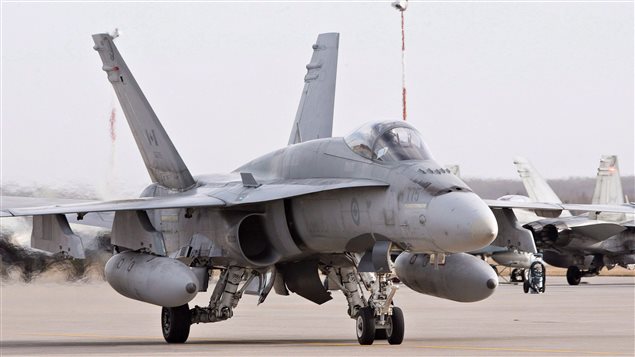 A pilot positions a CF-18 Hornet at the CFB Cold Lake, in Cold Lake, Alberta on Tuesday, October 21, 2014. The Canadian Forces says a CF-18 fighter jet has crashed in northeastern Alberta. A military spokesman said the plane was based out of Canadian Forces Base Cold Lake.
Photo Credit: PC / JASON FRANSON

A Royal Canadian Air Force (RCAF) pilot died today when his single-seat CF-18 fighter jet crashed just after 11 a.m. in Western Canada, near the border of Alberta and Saskatchewan.

The CF-18 from the 401 squadron in CFB Cold Lake, about 300 kilometres northeast of Edmonton, Alberta, crashed inside the Cold Lake Air Weapons Range in Saskatchewan, not far from the Primrose Lake Evaluation Range, officials said.

Tragically, we can confirm that the pilot did not survive the accident. The name will not be released until next of kin are notified.

A flight safety investigation will be conducted to determine the cause of the accident. #RCAF pic.twitter.com/YhwHawStrR

Emergency services are on site to secure the scene, and a flight safety investigation will be conducted to determine the cause of accident, officials said.

Officials declined to provide further details on the identity of the pilot, saying they were still in the process of notifying next of kin.

“Any time you get up in an aircraft and ask people to do the types of things that we do to be ready for our jobs day in and day out, there is a certain element of danger,” Lt.-Gen. Hood said. “It’s just a reminder of the dangerous work that we ask of the men and women of our air force and our armed force every day.”

The CF-18 Hornet entered service in 1982. The Canadian Forces initially had a total of 138 aircraft.

There are now 76 CF-18s in Canada’s fleet of fighter jets, which the government announced plans to upgrade last week.