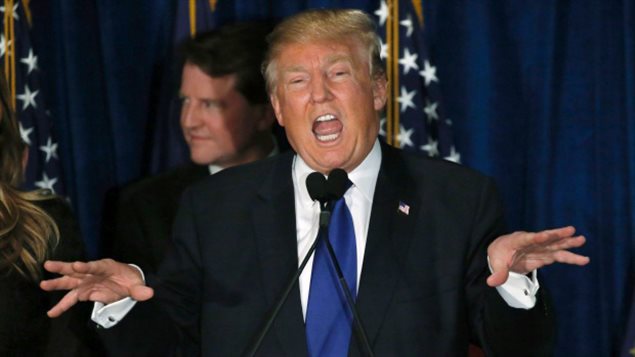 Canadian officials have struggled to make sense of U.S. president-elect Donald Trump and how to work with him going forward.
Photo Credit: cbc.ca

Canadians grapple with the Trump phenomenon

Canadian politicians and diplomats continue to ponder how the nature of U.S.-Canada relations will change–if at all–when Donald Trump takes over the White House on Jan. 20.

In what is the largest trading partnership in the world, Canada sells three-quarters of its exports to the U.S.

Every day, the two countries exchange $2.4 billion in trade of goods and services.

Through the Access to Information Act, The Canadian Press news agency has just released diplomatic briefing notes between Canada’s representatives in Washington and mandarins in Ottawa as they attempt to make sense of Donald Trump.

Noting that Trump’s rhetoric is often contradictory, uninformed and unpredictable, the diplomats say he rarely mentioned Canada during his election campaign and that might be cause for optimism.

Trump threatened to scrap the North American Free Trade Agreement but has been unclear about what he might want to renegotiate or how he views the original, separate Canada-U.S. trade agreement completed in 1987.

Canadian Prime Minister Justin Trudeau said in November that “if Americans want to talk about NAFTA, I’m more than happy to talk about it.”

Trudeau make the comment a day after Canada’s ambassador to the United States, David MacNaughton, said Ottawa would be “happy” to renegotiate NAFTA.

Trudeau was immediately castigated by opposition parties and accused of being “naive” and “panicked.”

Trump has also said that he would approve the controversial Keystone XL pipeline, a source of friction between industry and environmentalists in both the U.S. and Canada.

On Wednesday, Trudeau told a business audience in Calgary, Alberta that he supports a push to get the pipeline built.

Diplomats added that there appears no near-term solution to the long-running and contentious softwood lumber dispute between the two countries, marked by litigation since the 1980s.

In Novermber, Trump and Trudeau invited each other to visit.

No date or venue has been set.

A U.S. president traditionally makes his first foreign visit to Canada, but if Trump has proved nothing else, it’s that he is not particularly fond of following tradition or protocol.