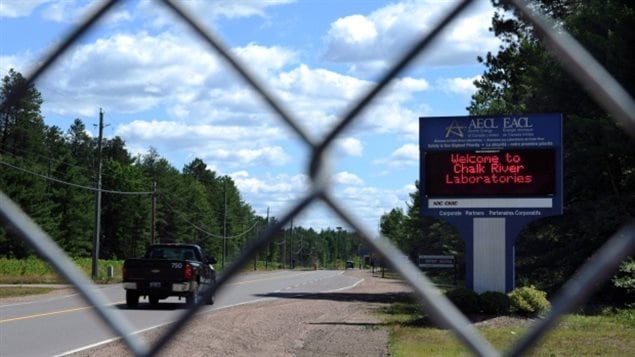 Chalk River, Ontario, a production facility for medical isotopes, is planning on shipping weapons-grade nuclear waste to South Carolina in the United States. It is one of the major Canadian issues in the renewed spotlight on nuclear challenges.
Photo Credit: CP / Sean Kilpatrick

Nuclear renewal or review in wake of Trump tweets

“The United States must greatly strengthen and expand its nuclear capability until such time as the world comes to its senses regarding nukes.” Trump tweeted.

There is a lot of discussion today about what he meant. ‘For Gordon Edwards it is ‘an astounding statement, especially considering the delicacy of the whole situation regarding nuclear weapons.’

Gordon Edwards, head of the Canadian Coalition for Nuclear Responsibility, describes nuclear weapons as ‘the only mechanism that we have that can make the world uninhabitable in a matter of hours’.

He says the United States and Russia have 93 per cent of the world’s nuclear weapons and to say that it’s necessary to expand that capacity, ‘is really quite absurd’. Edwards says, “It’s a very scary statement because it means that we haven’t really learned our lesson from the past.’

Along with the potential of a renewed nuclear arms race, however, the world must come to terms with the reality and the legacy of nuclear power.

In a lengthy year-end interview Edwards discussed some of the positive developments in the nuclear power industry, which is leaving a growing pile of deadly waste that remains a challenge without a solution, and this awakening regarding a potential nuclear arms race.

‘The age of nuclear power is winding down.’

Gordon Edwards says ‘the world’s recognition that nuclear power is not something that offers a future, a sustainable future’, is a very positive development, and that the age of nuclear power is winding down.

There are fewer nuclear reactors in operation now in the west than there have been for decades.

Edwards cites Japan’s cancellation of the troubled Monju reactor, once touted as the state of the art in nuclear power technology.

Another positive move is the recent resolution at the United Nation’s General Assembly calling for a treaty to ban nuclear weapons completely. While the nuclear-equipped nations are boycotting the resolution, the debate over the failure of the Nuclear Non-Proliferation Treaty, will help promote debate, particularly in the upcoming Trump administration in the United States.

‘We are now entering the age of nuclear waste.’

In another development, the province of Quebec has joined the Canadian provinces of British Columbia on the west-coast, and Nova Scotia on the east, in declaring a moratorium on uranium mining.

Edwards says, ‘there are fewer nuclear reactors in operation now in the west than there have been for decades.’ Quebec closed its nuclear reactor at the end of 2012, and in the United States, old reactors are being decommissioned faster than new ones are being built.

The downside according to Edwards is that ‘we are now entering the age of nuclear waste.’ Ontario is facing the possibility of having radio-active waste transported thousands of kilometres, over the Great Lakes watershed, to a storage facility in South Carolina.

Just a couple of ounces of this liquid material, could poison the drinking water for a entire city.

‘This stuff is so radio-active, if you were to take, for example, the reservoir that feeds the drinking water for Washington D.C. and put two ounces of this material into that reservoir and stir it up, then you would have contaminated the reservoir to the point where it would be undrinkable.’

The proposed transport will take 150 tanker trucks, accompanied by armed convoy. Edwards questions the safety of moving the waste in liquid form, why not solidify it first, or best of all, leave it where it is in Chalk River, he says.

While there has been no great public opposition to the transportation plan yet, 44 organisations have written to both Prime Minister Justin Trudeau and President Obama requesting that this series of shipments be held until the existing regulatory process under the Great Lakes agreement is followed.

Regarding nuclear weapons, as the International Physicians for the Prevention of Nuclear War suggested several years ago, the arms race is similar to an addiction; those involved can’t see what they’re doing, and they need help.

Today, Vladimir Putin downplayed Trump’s tweet during a televised year-end news conference. The statement came as no surprise he said, since Trump had made similar statements during the recent election campaign.

Putin clarified that Russia is continuing to modernize its armed forces, including its nuclear weapons. And he said Russia is not interested in a renewed arms race, but is working to improve the capacity to break through missile defenses.

NATO’s deployment of missile defense systems in countries bordering Russia has raised tensions between Moscow and the West.

And Trump, for his part, told MSNBC’s Mika Brzezinski, in an off-air phone call this morning, what he meant in yesterday’s tweet, proclaiming, ‘Let there be an arms race, we will outmatch them at every pass, and outlast them all.’