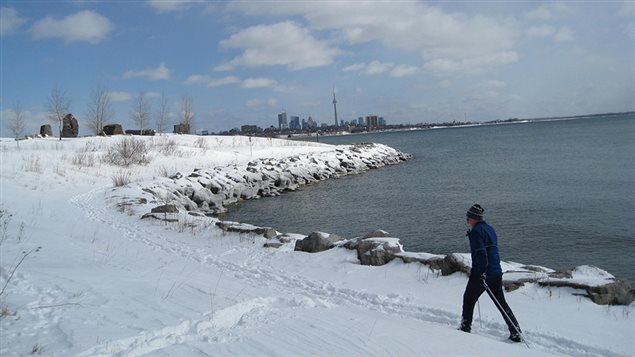 The Trans Canada Trail near Toronto, now connects all the capital cities in Canada, and when completed this year, will connect 15,000 communities.
Photo Credit: Courtesy of The Great Trail

The Trans Canada Trail, or ‘The Great Trail’ as it is becoming known, is getting close to finished. And finishing it, means connecting it.

A gift from Canadians to Canadians!

Deborah Apps is president and CEO of the Trans Canada Trail Foundation. She describes the work as a “twenty-five year dream in the making”. It was originally the vision of two men; Dr. Pierre Camus, from Montreal, and Bill Pratt from Calgary. Apps explains that during the 125th anniversary of Canadian confederation, in 1992, these two men thought it a good idea to connect Canadians with a trail that would go from coast to coast to coast.

A trail of trails

What began quietly in 1992 has grown into a project with fierce support from many Canadians, and many high-profile Canadians have championed the cause. Deborah Apps says it is a “trail of trails” but the challenges have been in the details, connecting all 432 together. From bridges that either needed to be built, or restored, to pathways through urban centres, the trail now connects all the capital cities.

“The wonderful thing is, is that the trail is owned by local communities and municipalities; it’s built by them, it’s built the way they want the trail to be built depending on how they want to use it, and they own and they operate the trail.” It is becoming celebrated as the “gift from Canadians to Canadians”.

The maritime province of New Brunswick and the prairie province of Saskatchewan are both 100 per cent connected so far. The rest of the country is catching up quickly. Deborah Apps says they managed to connect twenty-one and a half thousand kilometres in twenty-five years, and the trail will total almost twenty-four thousand kilometres later this year.

“Trails are becoming more and more important, especially as we start looking at our physical fitness level, and our need to get out into the environment and to find some solace in the environment whether it’s into the wilderness or whether it’s just walking along an urban pathway”, Apps says.

They are currently two pioneering women making their way across the country along the trail. Sarah Jackson started out from Victoria, British Columbia on the west coast. The twenty-five year-old student is hoping to arrive in St. John’s, Newfoundland in March. It it’s around the 17th, there will be quite the party for her!

In an interview with the Toronto Star newspaper, as Jackson was trekking through that city in October, she said she’d learned how to ask for help on this journey, something she wasn’t expecting. She also said “No matter what, at the end of the day, I look up and I’m so overcome with how lucky I am, and what a beautiful place it is.”

“What a great legacy we’re leaving for the future”

Dianne Whelan is moving in the opposite direction, but she will include a trek to the northern coast reaching the Arctic Ocean, before completing her journey in Victoria. She will be the first person to paddle the Great Trail’s 7,000 kilometres of waterway. Whelan describes it as a network that includes traditional First Nations paddling routes, railway lines, and historical fur trade routes.

Whelan is very conscious of the official theme of Canada’s 150th celebration as a time of reconciliation with our First Nations people. She acknowledges her own native heritage with ancestors from the Mi”kmaq people of Atlantic Canada. Whelan told CBC host Brent Bambry in a recent interview, that she’s happy to see the resurgence of many native communities. She also keeps the missing and murdered aboriginal women in mind as she begins each day.

Meanwhile, Deborah Apps is working on the opening ceremony, but for the moment she is sworn to secrecy. As the snow begins to melt, sometime in early March, we should be hearing what’s in store to inaugurate this monumental achievement. Dianne Whelan may have expressed it best; “What a great legacy we’re leaving for the future.”