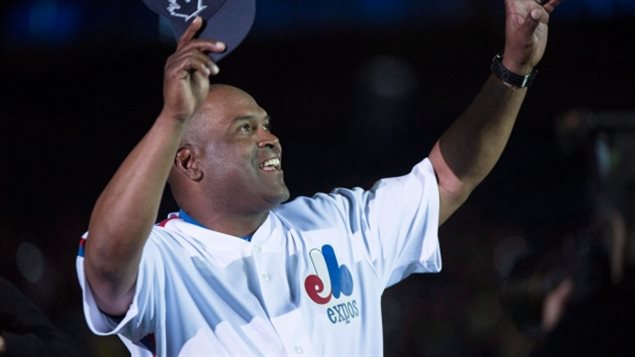 Tim Raines, the former Montreal Expo baseball player, thanked the fans, after hearing the news that he was finally voted into Baseball’s Hall of Fame.

There was jubilation in Montreal yesterday as the news travelled fast. The city’s Mayor took time out from an exhibit opening at the Montreal Museum of Fine Arts to share his joy,

Tim Raines is so loved by Canadian fans, that his case was even pleaded in Canada’s parliament when Chris Bittle, the Liberal MP for St. Catharines, Ontario spoke in the house last November, “I rise today to speak of an upcoming ballot,” Bittle declared in the House of Commons. “This is not a matter for the Minister of Democratic Institutions. I am, Mr. Speaker, speaking about the baseball hall of fame ballot.”

RCI’s Terry Haig, a former Expo baseball broadcaster and beat writer, says Raines always connected with the fans. “When Raines was playing at the start there used to be 60,000 people at Olympic Stadium watching that so-called ‘Team of the 80’s”

“Finally his style of play has been vindicated”

This was Raines’ last year of eligibility for the honour. In the voting, by the Baseball Writers’ Association of America, he ended up on 380 ballots (86 per cent). But he had started at 24.3 per cent in 2008 and went to 55 per cent in 2015, to 69.8 per cent last year. Asked why this took so long, Terry Haig says, “First of all he played in Montreal, that’s a backwater in baseball.”

And, Haig continues, the Expos only made the play-offs once, so the North American TV viewing audience did not get to see him, or get to know him the way Canadian and Montreal fans did.

One of Raines’ team mates. Warren Cromartie, is the man behind the Montreal Baseball Project, one of the efforts to get a major league team back in Montreal, He says the honour is well-deserved. “He definitely was the kind of person who changed the game.” said Cromartie.

Will the spotlight and the memories do anything to further baseball’s future in Montreal?  Terry Haig doesn’t think so.

“What you probably need is either a Russian oligarch or a mid-East sheik to make it a vanity project because it would cost probably a billion dollars;  $500 million to build the stadium and another $500 million to buy into the MLB cartel. So I don’t know if anybody really wants to make that investment. I just don’t know if we have the wealth in Montreal.

Asked about his favourite memories of Raines, and Haig is quick to respond: “The famous 1987 opening day at Shea Stadium… He had not taken spring training because of a contract dispute and he came in and he went 4 for 5 including hitting a grand-slam homer to win the game”.

That was a debut, now for an amazing clincher, Haig can’t remember if it was the following year or in 1989;  “They were playing in Cincinatti, were the Expos, “And a guy named Ron Robinson was pitching a perfect game into the ninth inning. I don’t know if there was one out or two out, Wallace Johnson, who was a great pinch-hitter, our greatest pinch-hitter ever, hit a single and Raines came up and hit a homer. And all of a sudden Ron Robinson went from pitching a perfect game to the loser. It was amazing. Lightning… lightning.”