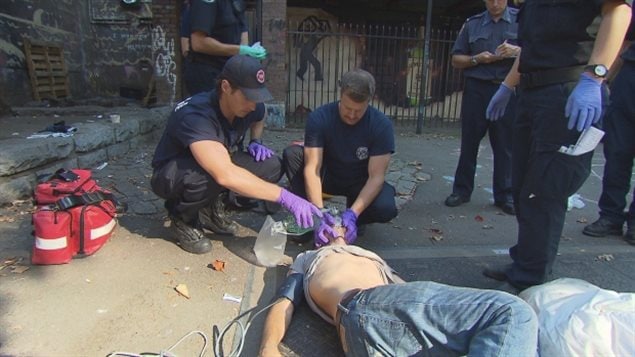 First responders in Vancouver are having trouble keeping up with the increasing number of people in need of rescue after overdosing on fentanyl.
Photo Credit: CBC

As if Canada’s drug problem was not bad enough, today came news that a baby was in a car with two people who were allegedly making a drug deal. Police told Canadian Press officers were conducting an ongoing investigation in Oshawa, just east of Toronto when they saw the incident.

Investigators apparently moved into to arrest the pair and found the powerful and deadly drug fentanyl, cash and a baby in the vehicle. A later search warrant of a home turned up drug paraphernalia. CP reports a 34-year-old man and a 27-year-old woman have been charged with possession for the purpose of trafficking. The baby was put in the care of another family member.

This comes on the heels of the province of British Columbia announcing that 914 people died of illicit drug overdoses in 2016. That was an increase of nearly 80 per cent from 2015 and the worse overdose year on record.

Fentanyl is being cut into other illicit drugs and increasingly being trafficked across Canada. Deaths are increasing and authorities are scrambling to provide overdose kits and to find other ways to stem the tide of overdose deaths.

One comment on “Baby present during alleged drug deal”