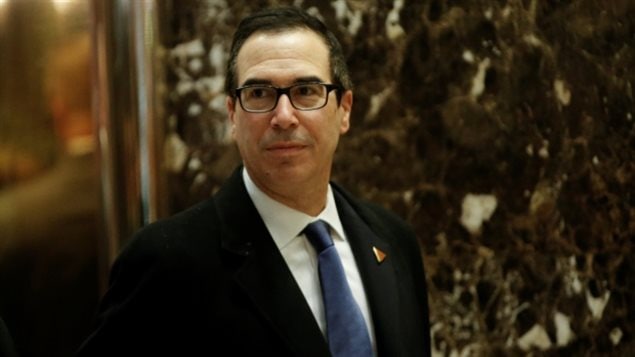 Steve Mnuchin, former Goldman Sachs partner, who went on to become known as the 'Foreclosure King' when he bought his own bank, is now Trump's nomination for Treasury Secretary.
Photo Credit: Reuters / Mike Segar

Dodd-Frank, the legislation that reigned-in wall Wall Street in the wake of the 2008 financial crisis, is another target of the re-visionary policies of the new Trump administration.

During the election campaign, along with “ripping up” the North American Free-Trade Agreement (NAFTA) as Trump demonstrated he would do, the President vowed to repeal Dodd-Frank.

Indeed, on this first day of the Trump presidency, the inner circle of Prime Minister Justin Trudeau’s government is gathered to prepare for the upcoming re-negotiation of NAFTA.

For Bessma Momani, an associate professor at the University of Waterloo‘s School of International Affairs, the big concern is the dismantling of Dodd-Frank. “I’m quite worried about the structural effects of what that will do to the global economy and to the banking industry writ large.” she says.

Dodd-Frank, named for its authors, was implemented to regulate the banks and impose rules to prevent the conditions for another global financial crisis.

Momani says the bill “increased the supervisory role of government agencies on systematically important financial institutions, known as SIFI’s, or those formerly known as “too big to fail”, and ensures for example, that they have enough money in their coffers to withstand a bank run, should it come to that.

Dodd-Frank prevents the banks from getting involved with hedge funds. It monitors mortgages to prevent predatory practices.and better protects consumers. A document of over 2400 pages, it has taken several years to implement it all.

“Forty per cent of the GDP is money making money off of money.”

“It ensures that banks are not up to the speculative no-good that they were before, it ensures things like these toxic assets being bundled into respectable offers don’t happen again.” Momani says.

But with the challenges in the global economy, such as the demographic realities in Europe with shrinking and ageing populations, so little going on in the way of innovation or technological breakthrough and many people saying, the 2.0 economy has maxed-out, the International Monetary Fund has branded it “mediocre growth”. And the new American administration, with Trump’s determination to spend a trillion on infrastructure, is looking like a great opportunity.

More money is pouring in to the U.S. because the rest of the world doesn’t look so hot, Momani says and at the same time the rules are getting more lax. “We’re back to the same conditions if we start dismantling Dodd-Frank” she says.

Meanwhile, the top positions in the Trump administration are being filled with former Goldman Sachs executives. The nominee for Treasury Secretary, Stephen Mnuchin, is a former partner at Goldman Sachs who, following his reign at his own bank, OneWest, earned the title of “Foreclosure King” for allegedly aggressive handling of those seniors with reverse mortgages. Mnuchin’s nomination is being vigorously challenged.

Momani fears the Trump agenda. “He will use that populist narrative to hide what is basically, or mask what is basically a very elitist pro-bank policy by suggesting that somehow this is for the average-joe to be able to access capital.” she says.

And in the world’s number one democracy she points out that the financial industry is a major player. “Forty per cent of the GDP is money making money off of money. It’s not producing anything tangible, physical, and that’s the crux of the U.S. economy, so it is, overall a perfect storm of what I think might be a real problem down the road.”