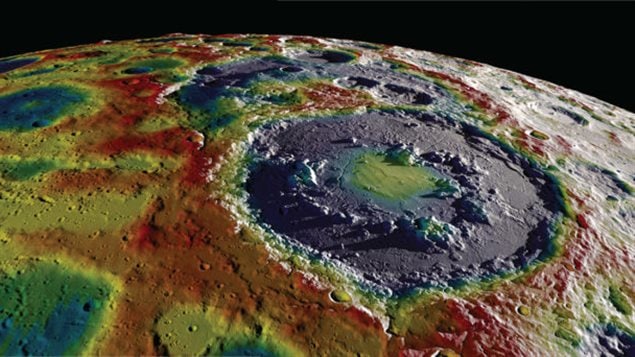 Could life be found on other planets by investigating craters? This is the Schrödinger crater on the Moon, from NASA’s GRAIL project. The more continuous outer ring is the crater rim, and the discontinuous, uneven inner ring surrounding the central greenish-yellow area is the peak ring, similar to the feature drilled at Chicxulub and described by Morgan et al.

Could evidence of life on Mars be found in a crater?

The researchers are looking for evidence of bacteria within the rock.

As Professor Gordon Osinski says, we have clear examples of life here on earth that thrive without light or oxygen and at extremely high temperatures such as around the “black smokers” on the ocean floor.

Gordon Osinksi (PhD) is an associate professor in the Departments of Earth Sciences, and  Physics and Astronomy at Western University in Ontario. He was a member of an international team exploring the Chicxulub crater in Mexico.

It was a critical event in Earth history.

Some 65 million years ago a huge meteor hit in the area of the Yucatan Peninsula. It was so powerful it resulted in wiping out the dinosaurs and most of the life on the planet.

The international group is studying crater formation, and how life on Earth recovered following such cataclysmic events.

The scientific mission drilled from 500 to 1300 metres deep into the peak ring of the giant crater for samples.

The impact was so great that they discovered the rocks were more porous than models had predicted.

The mineral rich porous rocks and warm water could well have presented suitable habitats for simple organism to take hold, and may have been where life forms began on Earth

The peak ring is important to study as it represents rock from as deep as ten kilometers down that was pushed down then outward and then upward to the surface in the centre as the asteroid struck and embedded itself deep beneath the surface. That great amount of rocks and earth would then collapse again downward and outward to form a ring.