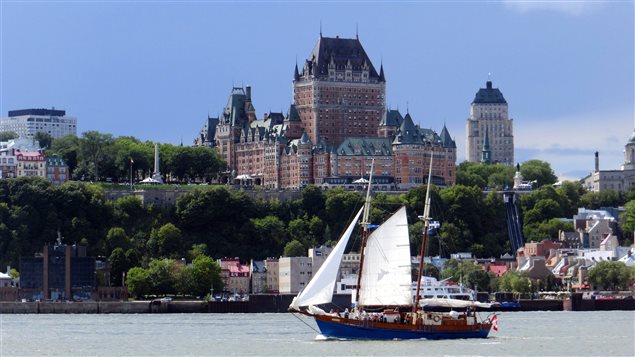 The Chateau Frontenac, one of Kate Reed's favourite hotels, and the one her grandmother, who decorated it, might have loved best as well!
Photo Credit: CP / Cal Woodward

Kate Reed has been described as Canada’s first designer, and this country’s first career woman, all of this at the beginning of the twentieth century.

Kate Armour Reed was born in 1856 into the Victorian era of colonial Canada. She lived and worked into the new century, observing the Great War and the growth of Canada until 1928.

“You had the most extraordinary grandmother! You have to write her biography one day.”

Kate Reed, the granddaughter who was named for her, grew up knowing how well-loved she had been, Her father Gordon, she says, had a wonderful and very loving relationship with his mother. The affection is evident in family photos, unusual om that era of formality. These photos and photos of her work and the places she lived are all included in the book Kate Reed has written on her grandmothers extraordinary life.

Kate remembers as a child, so often hearing people say to her, “You had the most extraordinary grandmother! You have to write her biography one day.”

Fervently loved by two men, Kate Armour was first wooed during a visit to New York City, with her younger sister in 1880. Grosvenor P. Lowrey, an older widower with five children was struck by Kate. He wrote her love-letters, and when she got to know him and appreciate how much they had in common, she married him.

This was the beginning of a charmed life in New York society, enjoying everything and everyone that mattered. Kate Reed quotes Mrs Pierpont Morgan, that was Hamilton, J.P. Morgan’s daughter, who said of her:

“Kate Lowrey was the most extraordinary woman I have ever met. As hostess to my brother, I had occasion to meet most of the great ones of my generation, and Kate Lowrey topped them all.”

Following Lowrey’s death, Kate returned to Canada and settled in Ottawa with all her children. This was when the second romance blossomed. She had once been engaged to Major Hayter Reed, now she went through with the marriage.

Ottawa society took to her much as they had in New York. Prime Minister Wilfred Laurier was impressed with her, as were Lord and Lady Aberdeen, the Governor General and his wife,. Indeed Lady Aberdeen  recognized Kate’s competence making her one of the first governors of the Victorian Order of Nurses.

“This was the train that would take the Royal Couple across Canada. “So that was her sort-of first contract, and of course she did it very well.”

But it was in 1900 when Sir Thomas Shaughnessy, President of the Canadian Pacific Railway (CPR), offered Reed the position of manager of the Château Frontenac that Kate’s life really began to take off.

“She started right in, moving furniture around and decorating the shelves and just making it much more comfortable and homey”, Kate says with a chuckle. Shaughnessy noticed the improvements and the following year asked Kate to decorate the train for the future King George V and his consort, Mary,

“This was the train that would take the Royal Couple across Canada. “So that was her sort-of first contract, and of course she did it very well.”

The result earned her carte blanche, “And then Shaughnessy said Kate, whatever you think the hotel needs doing, you go ahead and do it and send me the invoices” Reed says.

Kate Reed, the granddaughter, was surprised to see, on a recent visit, that in this next millennium, many of the sofas, now recovered, and chairs are still part of the furniture, in some of the hotels her grandmother decorated out west.

For Kate now, her favourite hotel is the Lake Louise, in Alberta. She says it is “magical”. “You walk through the front door and then you see this lake, and the glacier at the end of it and the mountains on both sides, I think because of the view and the surrounding territory, Lake Louise is my favourite.”

The Chateau Frontenac in Quebec City might have been her grandmother’s favourite, as it was the beginning of her new life, living happily as a family. But ‘The Empress’ in Victoria, British Columbia, was also close to her heart, Kate says.

She and Hayter contrbuted to the planning and design from the beginning, with the drawings involving the placement of the rooms and the traffic areas. Reed says, “she was able to design right down to the table napkins.”

“Kate was very loving, and she was loved in return. She was called ‘Aunt Kate’ by just about everyone, even people she didn’t know very well, just because she had that aura, that mystique about her.”

When asked how she feels now that she has written the book, Kate says, “I wish we’d had time together.”