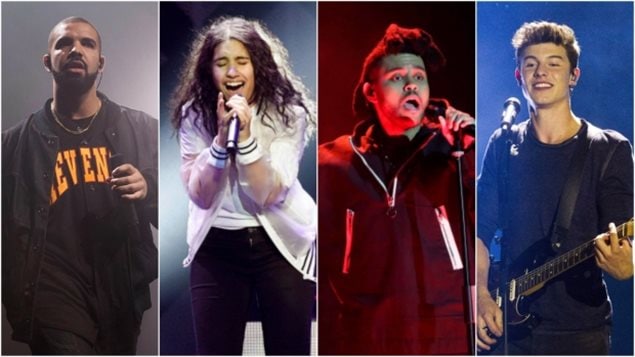 Drake, Alessia Cara, The Weeknd and Shawn Mendes are the Canadian singers with the most nominations for 2017.
Photo Credit: AP

The Juno Awards, Canada’s annual celebration of music, will take place April 2nd, in Ottawa at the Canadian Tire Centre, and today the nominees in 41 categories were announced.

Some of the nominees are no surprise, Drake is nominated in 5 categories, as is The Weeknd, and 18 year-old Shawn Mendes, who is in the middle of a world tour. Along with Alessia Cara, nominated in four categories, all these artists hail from the Greater Toronto Area.

Shawn Medes and Alessia Cara will be performing at the event, while Drake, who’s also nominated for two Grammy Awards this year, and The Weeknd will not be in attendance.

The late Leonard Cohen received 4 nominations for his last album, You Want it Darker.

And The Tragically Hip earned multiple nominations, including for group of the year and rock album of the year for their latest release, Man Machine Poem.

The band’s songwriter and frontman, Gord Downie, who revealed last spring, that he is suffering from inoperable brain cancer, was also nominated for songwriter of the year and for best video, while his solo project, Secret Path, is up for best adult alternative album and recording package of the year.

Buffy Ste. Marie will be honoured with the Alan Water’s Humanitarian Award for her social activism.

Sarah McLachlan will be inducted into the Canadian Music Hall of Fame.

And once again Michael Buble will host the televised show. He hosted the event in 2013 in Regina, Saskatchewan. And after recently sharing the good news that his three year-old son, who was diagnosed with cancer, is now responding well to treatment, Buble was happy to host once again

“I’m just a kid from Burnaby, so to get the opportunity to host this incredible night in Canadian music, for the second time, is amazing,” said Michael Bublé.