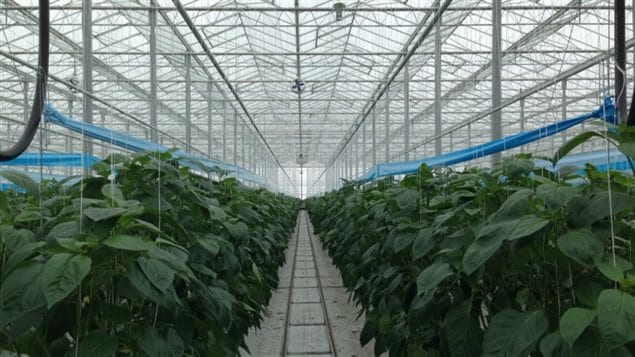 Ontario greenhouses contribute over $2 billion to the provincial economy, but rising costs due to cap and trade, and rising electricity prices are forcing some out of the business
Photo Credit: Jonathan Pinto/CBC

Ontario cap and trade,energy costs : slow death of an industry

The concept was heralded with much fanfare. Ontario would join Quebec and California in an emmissions cap and trade programme.

The idea is to reduce greenhouse gases by penalizing those polluting industries and benefit those which reduce their emmissions.

Caught in the middle are Ontario’s greenhouse producers, those who heat with natural gas.

But recent increases in electricity charges (Hydro) in the province are also hitting other growers as well.

According to the Agricultural Adaptation Council, there are about 3,200 acres of food crops and flowers under production in Ontario, employing about 20,000 workers, and contributes some $2.3 billion to the provincial economy.

That may change, and not for the better.

On January 1st, the provinces new cap and trade policy came into effect and greenhouse operators took an immediate hit.

Gerry Mastronardi grows tomatoes in a 16 acre operation in south-western Ontario says most of the small operations in the area are family owned and have been handed down from generation to generation.

He says the new tax is killing their business, adding that he recently told his son to start looking at other careers as there was no future, in the business which he says might not survive.

Several greenhouse operations can’t apply for the cap and trade programme because they are either too small, or too energy efficient, and so get nailed with huge bills.

Quoted in the Windsor Star, he says,”“The only way I can get in (the program) is if I open up my steam valves and shoot everything off into the atmosphere and burn the fuel up but come on, that’s ridiculous”.

He adds, “It doesn’t make any sense. That’s why we’re up in arms here.”

“We have significant concerns about availability and cost of food”

Justine Taylor of the Ontario  Greenhouse Vegetable Growers says that their members are reporting a doubling of bills.  She says the average OGVG member operates 14 acres of greenhouses and estimates costs would be an additional $86,000 annually.

She adds however that when the federal carbon pricing programme comes into effect in 2022, costs will have risen to $240,000.

Quoted in the Chatham Daily News, she say, “We have significant concerns about how this is going to impact the availability and the cost of local food”.

She agrees with concerns expressed by some growers that operations may close in Ontario, while others might move to other jurisdictions without the cap and trade, possibly even to Michigan

Mastronardi and several othe greenhouse operators are asking to meet with Ontario Premier Kathleen Wynne to discuss the issue which they say is killing the business.  “That is the bottom line, we just cannot justify this, we cannot afford this”, he says.