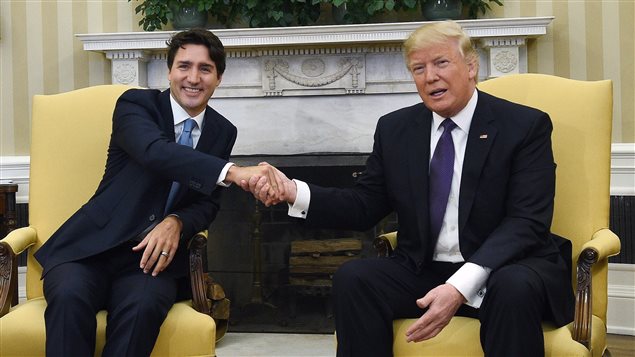 Trump and Trudeau discuss border and terrorism in phone call

Prime Minister Justin Trudeau and U.S. President Donald Trump discussed cross-border issues and terrorism during a phone call between the two leaders today, according to a readout provided by the White House.

“President Trump underscored the importance of America’s relationship with Canada for addressing the problems facing both countries, as well as the opportunities for both countries,” said the statement released by the White House. “To that end, President Trump emphasized the importance of working closely with Canada on cross-border issues, including implementation of his Administration’s actions to protect America from terrorist attacks by foreign nationals and others.”

According to an account provided by the Prime Minister’s Office to CBC’s Aaron Wherry, Trudeau and Trump “discussed a range of bilateral relations issues, including border co-operation, moving forward on the softwood lumber file, and the upcoming G7 and G20 summits.”

A senior Liberal told CBC News the phone call was conducted at the request of the Canadian government.

The two leaders met for the first time ten days ago in Washington, D.C.

In a joint statement released after their meeting, Trudeau and Trump emphasized the ties that bind both North American neighbours.

“No two countries share deeper or broader relations than Canada and the United States,” said the joint statement. “We are bound together by our history, our values, our economy, our environment, and our resolve to improve the lives of our citizens. Our close relationship and ongoing collaboration allow us to successfully meet any challenges we may face over the coming years, and to build a prosperous future for the people of both countries.”

However, there is ongoing uncertainty over President Trump’s plans to “tweak” the North American Free Trade Agreement with Canada – and more radical changes to the agreement with Mexico – as well as ongoing trade disputes over softwood lumber and Canada’s supply management system for dairy products and poultry that have the potential of poisoning the relationship between the two countries.

Also in recent months Canada has experienced a surge of asylum seekers illegally crossing the U.S.-Canada border to claim refugee status in Canada. Most observers attribute the surge to the crackdown on undocumented migrants as well as attempts by the Trump administration to ban citizens of seven Muslim majority countries from travelling to the U.S.