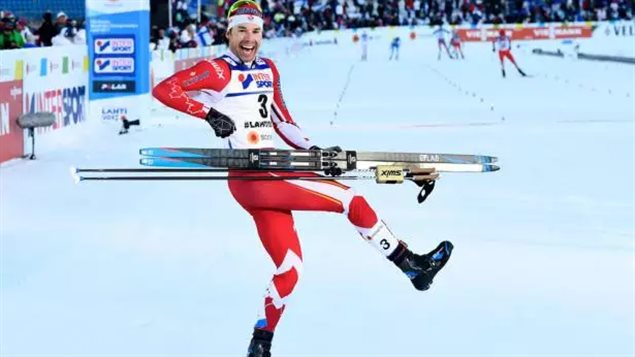 Alex Harvey, the cross-country skier gloried in a gold win yesterday taking the world title in the men’s 50-kilometre race.

Referred to as the “Prince of Quebec” for the celebrity he’s become in his home province, Harvey won the race by only six-tenths of a second over Russia’s Sergey Ustiugov.   Matti Heikkinen, the hometown favourite from Finland, finished 1.4 seconds behind for the bronze.

At the finish Harvey was anointed the“King of Quebec” when his teammates started chanting the title following his excruciating victory.

Pacing himself for one hour, 46 minutes and 28.9 seconds, Harvey pulled away from the pack and crossed the finish line staying on his feet instead of collapsing with the sheer exhaustion.

Following in his father’s tracks, Canadian cross-country ski legend Pierre Harvey, Alex always wanted his own individual world title in the sport that made his dad famous.

“It means everything to me,” Harvey told Canada’s Postmedia yesterday from Lahti, Finland.

“This is what I’ve been striving for and dreaming of since I was a kid. I wanted to be a world champion in something — whether it was the one-kilometre or the 50-kilometre — that’s what I’ve been training for.

“And now to do it in the most prestigious race — the long one — it’s just surreal. You just hope you’re going to live through these kind of emotions once or twice in your life.”

“Normally after a 50K, I feel really tired, but right now I’m not feeling any fatigue. I’m on a cloud a little bit, and it’s awesome.” Harvey said.

“You need to have fast skis, great tactics, a bit of luck and some magic. Today, I had the magic.”