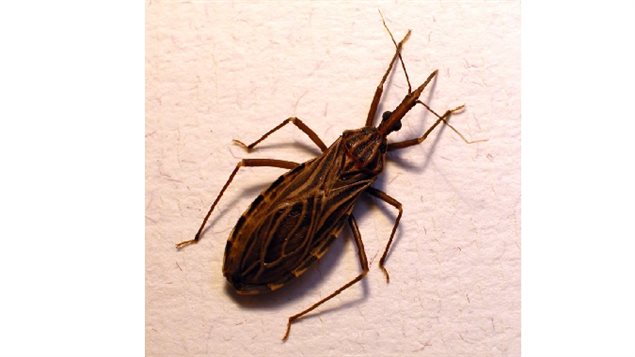 A Vinchuca (Rhodnius prolixus) usually gives a small bloodsucking bite. When sleeping victim scratches the itch the Chagas parasite in the bug's faeces can be dragged into the wound and bloodstream
Photo Credit: Erwin Heubner, U Mb, wikimedia

It does not have the profile of many other insect-borne diseases, but in parts of the world like remote villages in Bolivia and elsewhere the infection rate is high.

Chagas is known as the silent disease. One can be infected and after some mild initial effects, the disease can lay dormant for decades. In a substantial percentage of the population it can cause heart and intestinal problems leading to death.

Canadian Nicholas Gildersleeve was head of mission for Doctors Without Borders for a campaign in Bolivia against the disease Chagas.

Named after the Brazilian physician who discovered it in 1909, the disease is caused by a type of small beetle-like bug called a Vinchuca.

It comes out from its hiding places mostly at night and will create a small irritating bite to get blood while people are sleeping. The Chagas parasite is excreted in the bug’s faeces and when a sleeping person scratches the bite area the parasite can be drawn into the bite and into the bloodstream.

Gildersleeve says about 60 percent of the Bolivian population, especially rural areas, are affected.

Of those infected, Gildersleeve says about 30 percent will develop complications. He says that many premature deaths are blamed on heart attacks or other heart disease when in fact it’s often due to damage caused by Chagas.

He was guiding the DWB team in a campaign in collaboration with national health authorities to educate, strengthen local surveillance, and provide technical support.

They developed an app for mobile phones so that frontline workers can take photos of the vinchuca in people’s homes, send it a technician who comes immediately to fumigate the home.

That mission has just wrapped up and while the disease can be cured in a lengthy process of about two months, the campaign is designed towards improving prevention.